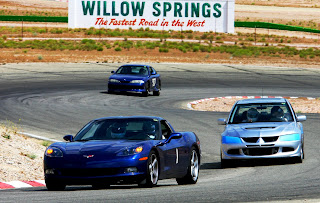 We had only just unpacked from our European trip, and beginning to settle back into the daily routines of our business life when we took off for a weekend racing. Car racing, that is, up in the Mojave Desert just north of Simi Valley. Carved into the gentle rise to the west of the township of Rosamond, lies the Willow Springs International Motorsports Park. And after watching others race at other tracks, we decided to try it for ourselves.

Well, truly racing? Not exactly, but …

How it all started.

Earlier this year we had friends over for dinner at our house in Boulder. As we were finishing the meal, talk turned to lifestyle issues. What did we like to do to relax? What were our interests outside of work? And it was during this conversation our friend told us he raced, campaigning a race car in California. He gave us the web site of a club he considered provided one of the best introductions to racing and encouraged us to take a look and to consider joining. After all, you can’t really drive the cars you buy these days at the speeds they were designed for, other than under supervision and on a race track.

Well, you can, but you risk loosing your license and it costs you dearly….

We looked at the web site of National Auto Sport Association (NASA) and at the programs they conducted for novices. Listed under the program for High Performance Driver Education (HPDE) was a level we immediately identified with – Level 1 for novices. It was an easy decision to join and we both did. At the same time, we registered for our first weekend event at the Willow Springs facility.

Perhaps the most important issue we faced – can we use Margo’s car for racing? We wanted to use her car since both of us can drive it, and derive some satisfaction, and it provides us with as much race-car feedback as we’re looking for. Hers is an automatic 2006 Corvette C6 with the Z51 handling and breaking package. We found out that there are no rules against using automatic transmission in HPDE, and for me, I still had reservations in running with an automatic, but at least the shifter came with steering-wheel mounted “paddles”. Margo flat refused to even think of using the manual gear shift while learning to drive really quickly!.

Before going any further, let me just put the Corvette into some kind of context as many of our friends rib us about racing such a large, heavy, American car. The data points are rather interesting.

And if one really wants to shed some weight….there are many diets I could follow! There is only 70lb difference, between a Porsche and Corvette, after all. Ummm, Starbucks muffins don’t look that appealing anymore!

Willow Springs International Motorsports Park opened in late 1953, and is marketed as the “Fastest Road in the West”. It’s basically a big bowl with a few extra twists as though the designer kept one end of a typical NASCAR circuit and then cut out the other half of the bowl replacing it with a couple of interesting short straights and challenging corners. Running clockwise, the circuit certainly proved very entertaining, and one that gets your attention very quickly.

After leaving the start / finish line you immediately face a sharp 90 degree left-hander where the exit point dips out of sight. Getting through that first corner then sets you up for a sweeping, 180+ degree late apex corner 2, where you really do have to stay out in the middle for a lot longer than you would first imagine. Corner 3 is again a very tight left-hander that is uphill but quickly throws you into the almost v-shaped right-hander corner 4. No matter how many times you line this up, there’s not really a smooth or obvious line through the corner. But no matter, races are not won or lost on this corner so charge on ahead. Coming out of corner 4 you let momentum push you a little out onto the left-hand side of the track before you begin looking down at the next set of corners - Corners 5 and 6 do need to be considered together. Nail them just right, and you can maximize your exit speed out of corner 6, and this is very important.

The racers pretty much stay full throttle through corners 7, 8 and only moderate their speed coming into the apex of corner 9. While corner 7 is only a slight change of direction and sets you up for a small back straight, the right-hand corners 8 and 9 are the wicked double-apex part of the NASCAR-style bowl. And you have to stay out in the middle with the cars momentum pushing you further out towards the edge of the track as you get closer to corner 9, aiming for the small rumble strip on the apex but keeping you eyes steady on the exit as you allow the car to push a little to the left.

Get this all sorted out and you can have a blast accelerating down the straight. Get any of it wrong, and your car fills with dirt – a circumstance we saw occurring often over the weekend. And this is one place where you really don’t want to bring the car back onto the track should you go off – even if it means continuing on through the pits.

We had decided that I would drive the Saturday (all 4 sessions) and then Margo would drive the Sunday (again, all four sessions). The format was pretty simple. The car had to pass a “tech inspection”, held very early Saturday morning. The inspectors were checking that the car was in good condition, and that our helmets were up to spec. We had decided to use our motorcycle helmets while we were racing as novices, and move to real car racing helmets in 2009 if we really liked the sport.

All drivers in the HPDE program meet for an introductory welcome and then quickly split up under the guidance of a lead instructor. In our case it was John – and he proved incredibly easy to work with. After each session, the group meets for a “download” review session, after which “track passes” are provided for the next session. Skip a download, and you miss the next session. Four sessions in all, and we were fortunate to both have the same instructor – Tom.

How did we do? What impressed us most was that under the guidance of Tom and John we both improved out of sight. The first two sessions before lunch were nervous times – learning the track and learning the flags. It’s just so important to have communication between the track-side marshals and the drivers, as so much can happen. And quickly! Each lunchtime break gave us time to review our progress and to think about improving, with time spent thinking about the corners that we were finding difficult. Tom had to skip the third session each day, as he had a conflicting race commitment of his own. A substitute was found for Margo, but I was let out on my own – and I was a little anxious. But we made it through intact, and kept on improving with each time out on the track.

In our group were level 2 “beginners”, who were familiar with the track, so as the afternoon wore on, their lap times improved significantly. And yes, in our group was a Viper, several M3s and a Carrera S. But as we came back from our fourth sessions, each of us was beaming from ear to ear – we both experienced the pure joy of having the car do what we wanted it to do. Almost, let’s be honest…We both were able to pull out and pass slower cars for the first time, and we really saw our speed through the 7, 8, and 9 corner complex go way up. You could just never experience any of this on public roads. Well, perhaps once, but it would probably end badly.

John posted a comment on the business blog, where I also wrote about the weekend “Heading for the exit …” http://itug-connection.blogspot.com/2008/05/heading-for-exit.html and we were pleased to read “as your instructor for that weekend I can honestly say, you two did an excellent job, and clearly listened to what was talked about. It was a pleasure having you at the track ...”

Were we driving 10 / 10ths, as the racers say? Well, perhaps 6 /10ths and perhaps even less on some laps – we can’t kid ourselves, we both have a long way to go. Margo is making excellent progress and appears to have the potential to be really quick! The photo included at the top of this blog is of her holding her own in one of the later sessions!

And how did driving an automatic turn out? Well, much better than I had expected. Margo drove full auto, while I switched the setting to sports mode and used the paddles. I did try one lap in full auto but it changed down once when I wasn’t expecting it, and so I quickly switched back to the sports mode. Overall – once we became familiar with the track, gears didn’t matter. The Corvette just has so much torque that you could circuit all day with half the track in 3rd gear and the other half in 4th!

As we drove home we couldn’t stop talking about the next outing. We hadn’t put a wheel in the dirt and we knew we could improve significantly. While we couldn’t say we had been completely “hooked” by the sport, just yet – we did recognize some of the signs. The car performed well and we liked our instructors. We both communicated well with Tom and for the early going, confidence in your instructor is important – especially when he is yelling “go faster, go faster, stay on the throttle and let the car drift out! Out further! Even further! …That’s it! Now pull the car back hard and sight the exit!”

Setting up the car for this first weekend, all we had to do was to check the tires, and have the brakes and alignment looked at. Brakes were good, but the alignment was way off and the tires had to be replaced. I knew Margo would suspect I just wanted to get new tires for the fun of it, so I actually showed her the metal beading exposed on the original “run flat” tires! On went a set of Pirelli P-Zero Rosso’s and they turned out to be terrific for the Corvette. The brake fluid was changed for one with a much higher tolerance for heat. And that was it. After the event, we changed the oil, and inspected the breaks - still OK!.

Are we looking forward to the next weekend late in June at ButtoneWillow? You bet … so stay tuned for the next installment as the race “novices” strive to move up a ranking and make it to “beginner” status. So much focus is made on safety, and on communications, that it’s a lot to take in, but as you become comfortable with your surroundings and confident in the skills and intentions of your fellow novices, the element of fun really begins to surface. Again, from our instructor John:
“ … see you soon at our next event at ButtonWillow. Although I will say, your C6 will be much more challenged this time ..”

And, after all, no matter what we talk about, or how we interact with others, accepting the challenge and improving our technique while having fun is what it’s all about – and we certainly came away with grins all round after this weekend!
Posted by Richard at 5:59 PM No comments: Links to this post