Traditions and peaches! … But not this time!

Labor Day weekend is usually sunny and warm here in Colorado, and for the past several years we tried to spend it in Grand Junction – the views are great, the Palisade peaches are fabulous, and there are several wineries making pretty decent wine there. And yes, there’s always the chance to see the Colorado Aspens begin to turn golden. 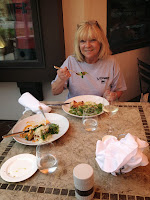 This year we took the Viper for the trip – roof down; not so much fun when we passed feedlots, but otherwise pleasant – and something that has also become part of our Labor Day tradition. Pictured above, on the streets of Aspen, it looked right at home in this mountain town.

As we try to do every year, we stopped for lunch in Vail. This time we stumbled upon a restaurant we had never visited before; lunch was great, and the place had a really nice atmosphere. It was called La Tour. If you are looking for somewhere nice to eat the next time you visit Vail, I strongly recommend the place. In the photo below, I am clearly enjoying the salmon salad! This restaurant is just off the eastern entrance to Vail and not that hard to find.

Each morning we headed into Palisade for breakfast and each time we looked for a peach dish but found one only once. However, on Sunday, there was a farmers market and peaches were available from almost every stall. These peaches did not disappoint, and as you can see in the photo below, Richard was admiring some.

The plan had always been to drive through lesser-known canyons and to explore some nearby mesas, or elevated tables, that you can see clearly everywhere you look in Grand Junction. As we explored, we really came to enjoy Highway 141, which takes you deep into a canyon that runs south of Grand Junction. We liked 141 so much that after Richard had driven it in one direction, I took the wheel and drove it the other way. This time while on the highway, we made a discovery –a car museum at Gateway. It is set up on the grounds of a hotel complex, and it turned out to be quite interesting. 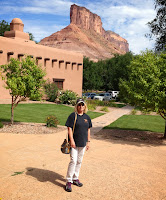 It is the scenery that sets this place apart – see below the photo Richard took as we began to explore the place: 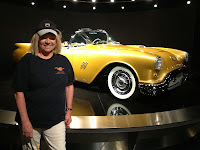 As for what the car museum contains, the car pictured below was bought at an auction for a cool $3 mils! Just so it can be on display? Whatever… It is an Oldsmobile F88 and the only one ever built. Claimed to be the world’s rarest car, it was built as a concept car and displayed as GM’s Motorama “Dream Car” of the 1950s.

As always, we made a detour from Highway 141 and took the Highway 145 exit to Telluride. It is a great village, and when we first went there, back in 2003, I did not know that it is quite famous – I just really liked the views… Back then the town was nearly empty, but this time, as it was the holiday weekend with the annual film festival under way, the place was full of tourists.

Before heading back to Boulder, we enjoyed another great trip that took us up and over the Grand Mesa … and back into Grand Junction via Delta. We took Highway 65, and while we had seen signs on the interstate marking the exit, we had never before been on this road. Now it’s something we are keeping in mind for the future, as the views from the top of the Mesa were spectacular.

The sad part is that we never bought those peaches. When we looked at them we were still digesting lunch and didn’t feel like eating another thing; then the market closed and there were no peaches to buy! We didn’t stop by wineries, either. Just ran out of time. Next year?

Posted by Margo Holen at 4:11 AM No comments: Links to this post