Round and around in the Georgia rain! 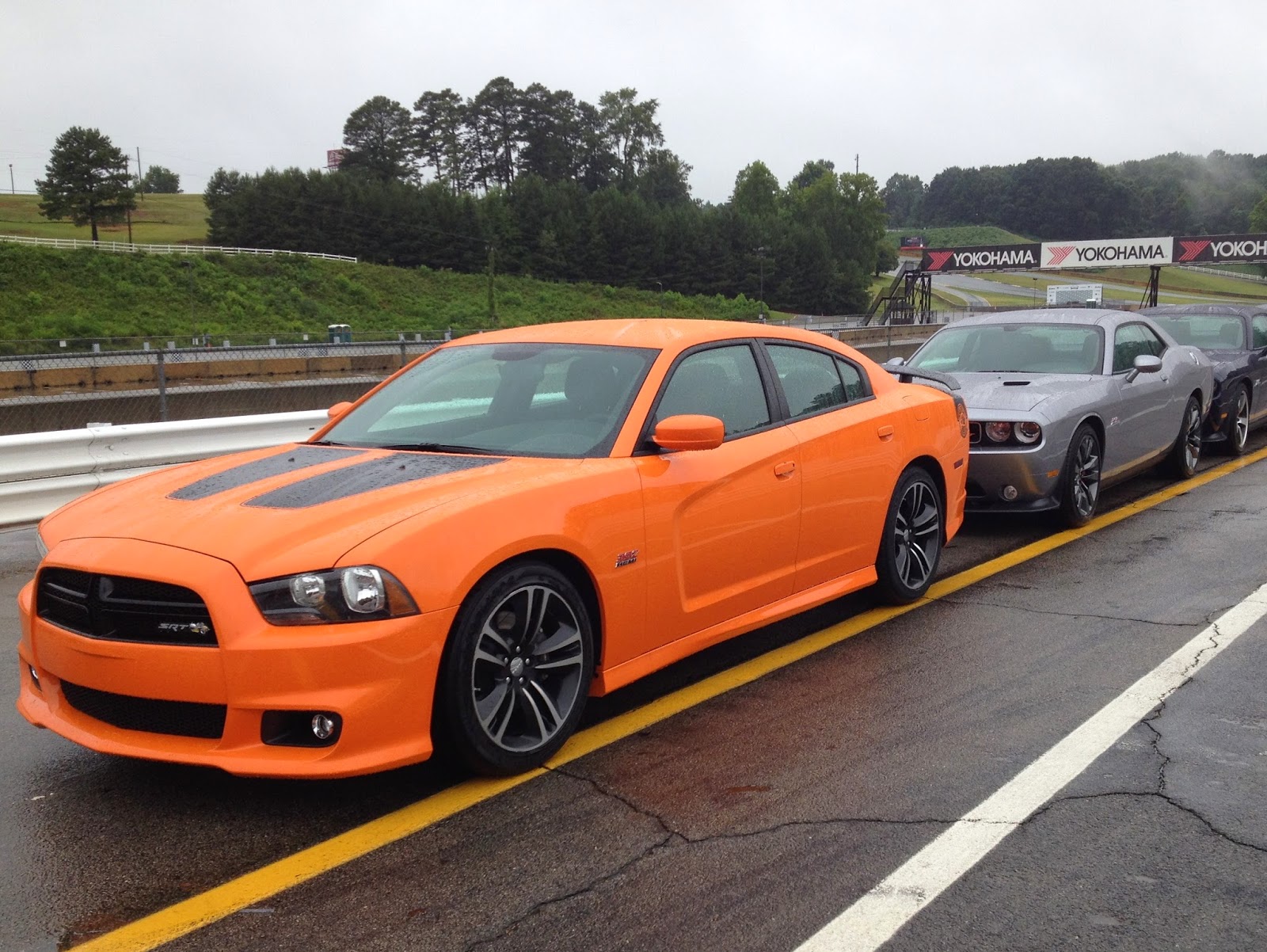 To break with tradition, and as an opportunity to try something completely different, we signed on to the Dodge SRT program for a track outing. The opportunity to lay down laps at Atlanta’s famous and stunningly beautiful Road Atlanta track was too hard to let pass by, so last month we actually caught a plane to try our hand on an unfamiliar track in cars we knew little about. Arriving in Atlanta very early on a Friday morning we had time to check in, eat breakfast and catch a few Z’s as the Saturday would be a very full day. Our steads for the day would be a selection of Dodge SRT 392 “Hemis”, and as can be expected, they were present in every color imaginable.

Margo and I have been circulating tracks around the world now for several years. It’s always been a part of the plan to visit as many locations as we could and readers will recall our adventures have extended to include time on track for both of us in Germany (on the world famous Nordschleife, or North Loop, of the Nürburgring) and just for me in Australia (on not quite so famous Eastern Creek, now renamed as Sydney Motorsport Park). Dreams and “bucket lists” do not give enough credit to the memories you make when on famous tracks but all the same, simply being in a fast car on a famous track is reward enough.

Take these images and then think about famous tracks in North America and you get the idea. There’s absolutely no way Ferrari or Red Bull will ever come knocking on my door so track time is more about the mere opportunity to drive fast than it is about becoming faster – and so, Margo and I have come to terms that it’s the variety that’s important and not proficiency at a select number of tracks, so again, circulating around Road Atlanta in someone else’s car was simply an opportunity too good to give up!

But first, the bad news. Waking early Saturday morning to give us plenty of time to make the trip from our hotel to the track we were immediately greeted with a tropical downpour. The rain was simply arriving in waves and we were drenched before we made it to our rental car. For this outing, coming as it were just a week before Margo was scheduled for back surgery, it would be up to me to represent Team Buckle – Holen and I have to admit, seeing such heavy rainfall didn’t put my mind at ease. Let’s see, powerful rear-wheel drive cars, an unknown track and oh yes, it’s wet as the dickens! Simply lovely.

Margo told me 2014 will remain permanently ingrained in her memory as the year track outings were solely for me and that she just came along and spent her time looking for a comfortable position! True, but with her back now scraped, fused and screwed together with 6 titanium bolts she should be as good as new next year and I am sure we will figure how to finagle a drive for her on another great track.

The whole point of the exercise from the SRT perspective was to give existing owners of SRT vehicles an opportunity to experience a variety of SRT configurations solo, on an autocross circuit, head-to-head on a mirrored pair of circular courses, and then follow-the-leader on the road course. The narrow inside-the-cones affair for the autocross and head-to-head experience for me was a waste of time and not my cup of tea, but the road course? It couldn’t have come soon enough. Jumping into a big rear-wheel drive “floating” Challenger SRT, with little visibility out the windscreen and very little weight over the rear wheels, the Challenger lived up to its name – a challenge alright!

Watch the in-car video below and it will give you a feel for what the experience felt like – the lead car, driven by a professional, would gradually lift the speed as he became comfortable with the degree of car control the followers exhibited, and of course I drew the ire of my fellow drivers when I hung back a tad to get a better perspective of the track. By implication, pulling back a little (and out of the spray thrown up by the leader) meant the pro driver backed off the speed and slow, pains-keeping, laps wasn’t the goal. But hey, not my car, not my track and not my real idea of fun! Somehow, I managed though through the set two lap formula.

I managed to join this program as we had bought an SRT but the SRT in question was a Jeep Grand Cherokee SRT. Basically, a complete misfit and the answer to questions no one asked. Jeeps are delivered “trail ready”, with little badges confirming as much, while the SRT was neither trail ready, nor for that matter suitable to any sojourns offroad. This was the proverbial beast designed to scare the heck out of your friends as you attacked twisty back-road canyons. Not for the faint of heart; instead of program selections such as mud or rock crawling, the Jeep SRT comes with setting like sport, track and the ever-popular launch control.
However, as the day progressed I began to look forward to my time behind the wheel of the Jeep SRT. Whereas the Challengers and Chargers had the older six-speed auto transmission the Jeep had the much newer eight-speed transmission with quick-response paddle shifters. Throw in a few extra pounds – probably as much as an additional 2,000 pounds – and this unorthodox track car relished the conditions and I was quick to connect with the vehicle. With a dozen or so laps under my belt in the edge sedans and coupes, the big SUV more than held it’s own on track and there was never a question of not keeping up with the pro driver. Go faster, was all I could think!
Play the video above and you will soon realize my quickest time came in the Jeep SRT. That shouldn’t be a surprise to anyone as the all-wheel drive set up gave me plenty of pull out of the corners and yes, Road Atlanta has corners. Lot’s of them, up hill and down dale, and with a combination of different cambers to really throw the car around – being smooth for a whole lap was yet one more challenge. As the day progressed, my lines around the circuit became more predictable and by the end of the “experience” I really got to like the track – yes, we have to go back but hopefully, under better conditions. As we left for the day, there was a large sign letting everyone know that in a few days time, NASA was holding an event at the track and that brought a smile to both our faces. Maybe, next year and this time, in our track Corvette! 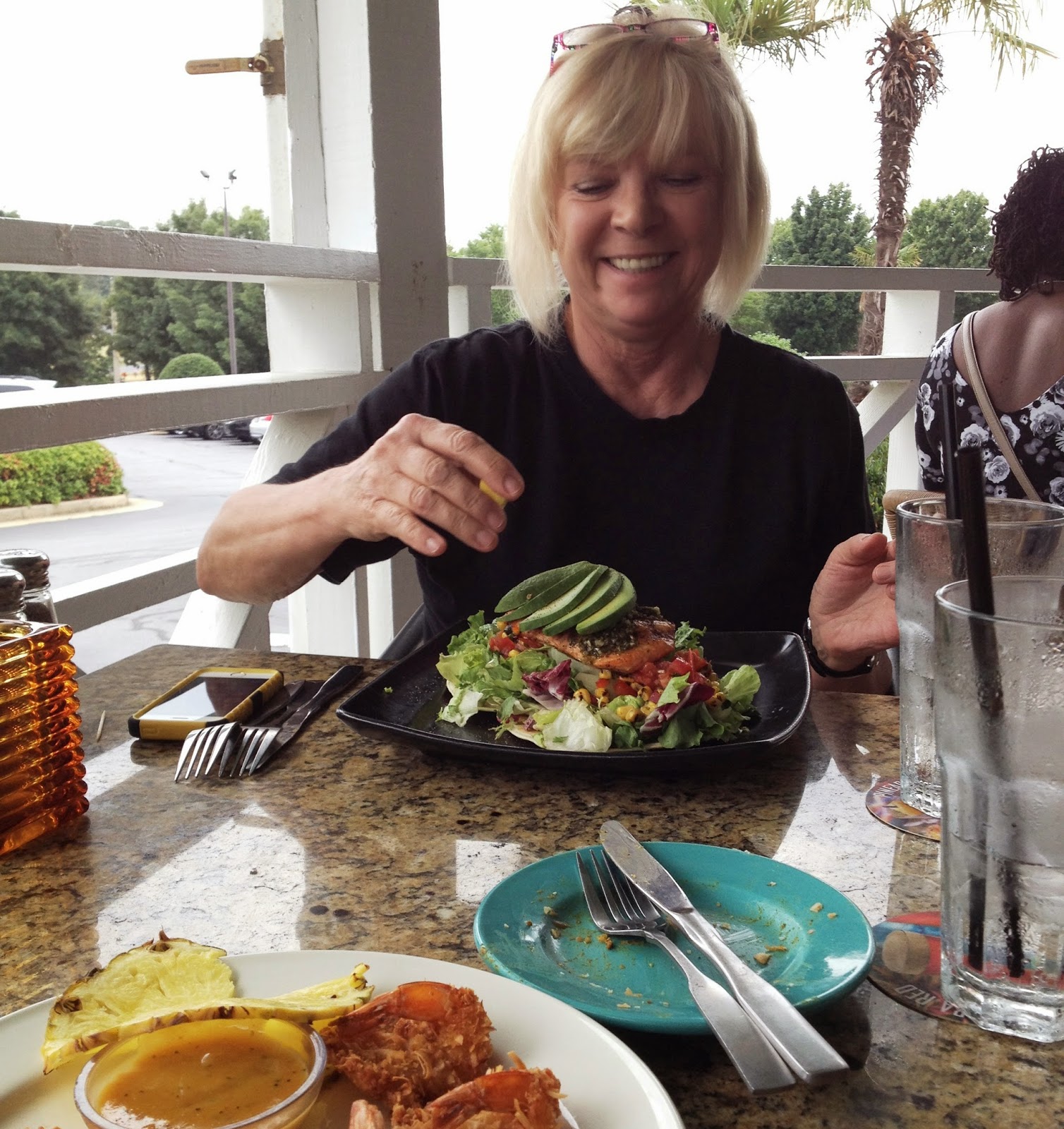 If Atlanta gave us the feeling of being in the tropics, where we ate each night helped confirm that feeling. Yes, that’s Margo on the veranda of the local Bahama Breeze restaurant digging into a salad while my coconut shrimp (with sweet chili sauce) was already close to being polished off. And yes, that’s water we were drinking as we tried to stay hydrated the whole time we were in Atlanta – flying is a bit of a novelty for us these days and it took us longer than we thought to recover from the short flight from Denver. However, Georgia is a great place to visit and so we literally soaked up as much of it’s atmosphere as we could.

Originally, we had planned our time in Atlanta to include a little business but cancellations brought about by changing business circumstances left us to look out for ourselves and we ended up managing just fine.  Dodge parent, Chrysler, really tried hard to give us a great day at the track but both the weather and the vehicles themselves worked against this really happening for the company. When asked what I thought of the cars I gave a polite, pass! Actually, to be truthful I was probably a little too forward with my comments that spanned the spectrum from pedestrian and dreadful. It’s clear after a day on the track that the focus of the Dodge SRT team was the quarter mile and after just a couple of drives, you quickly come to appreciate that in the right hands, these cars certainly could dominate the drag strip.

Having said that, the real track car – perhaps the best interpretation of the SRT mission – was missing from the fleet. No, there were no Dodge SRT/10 Vipers on hand! While the crew from SRT made it no secret that they would certainly have enjoyed having a few in the program, with prices climbing closer to $150,000 this wasn’t going to happen any time soon. The new generation Viper is a very track car and in the ALMS Tudor series is doing extremely well – performing much better than I had thought possible for such a new car. After nine rounds of competition, Corvette leads the standings, but the Viper is in second place a mere six points behind the leaders (264 vs 270 for team Corvette). As for the Aston Martin, BMW, Porsche and Ferrari teams, they are a long way behind and this may come as a surprise to those less familiar with GT racing. 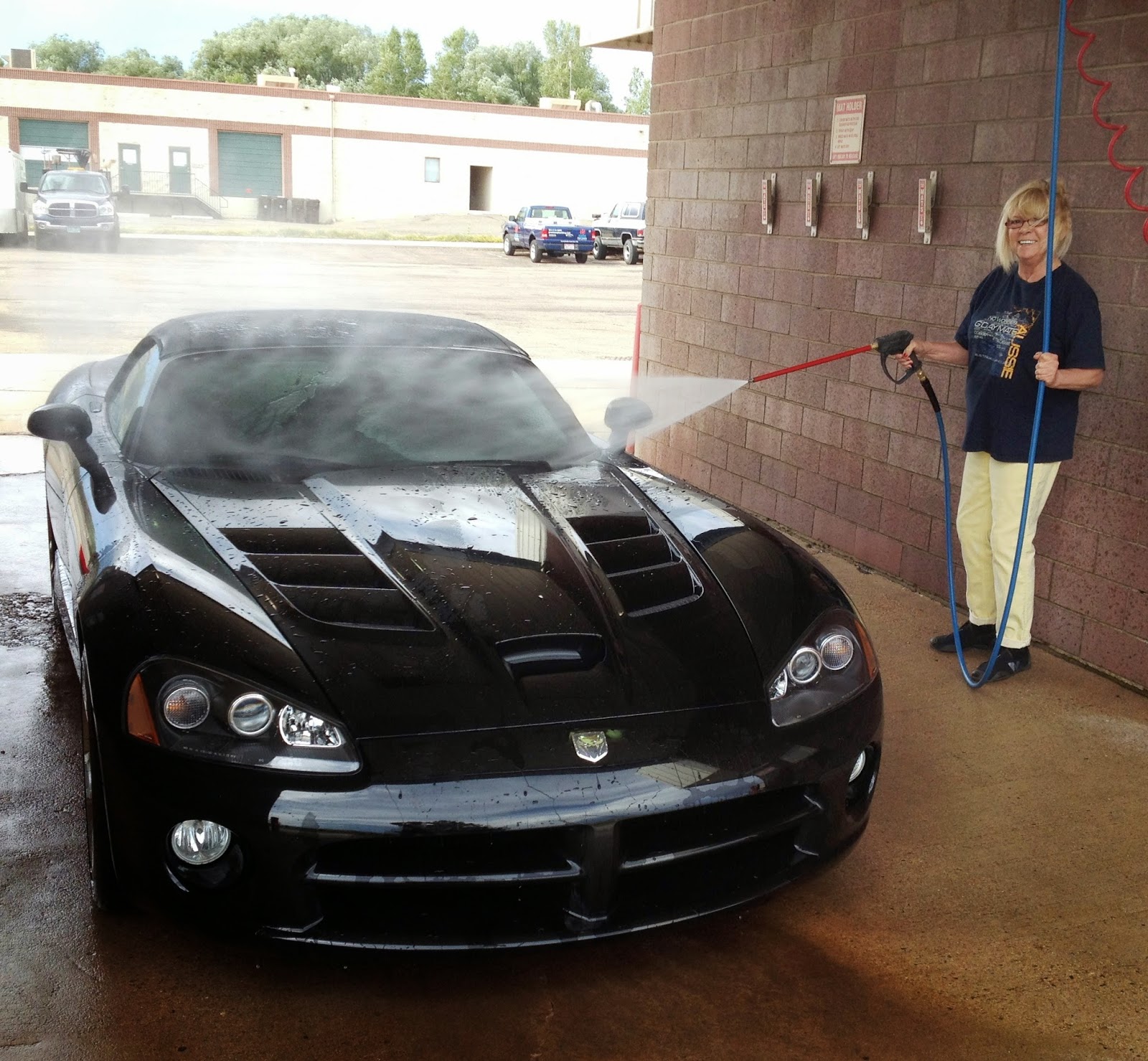 When it comes to our own, generation four, Viper - it’s no more. Getting it’s very last wash from Margo, after six great years (and only 10,000 miles on the odometer) we found ourselves driving the snake only two or three times a year and with an urgent need to ensure all of cars could be garaged – yes, winter is on its way – it made sense to scale back to just four vehicles. Sad to see the black mamba snake – not the real Black Mamba Viper, mind you - leave us, and who knows? Would we buy another? It’s possible but for the moment, unlikely, as our first nod would go to the new Corvette, but for many years now Margo and I are reluctant to ever say never.
As a track car the few occasions when we did take it on track it gave us a heck of a lot of fun – just don’t over rely on second gear to power out of turns, mind you. We have run high performance education sessions at both High Plains Raceway and the track at the Colorado State Patrol training facility and that was experience enough. I have even taken a number of clients out for a few “parade laps” to give them a taste of what the Viper can do and none of them came back disappointed. If someone comes along with a very low mileage generation four ACR in very orange, with black stripes, then maybe, just maybe, things may be different. And there’s a story there that will have to wait for another time.
Returning to the Corvette C5 Z06 parked in the garage, it now has a new track decal applied. Yes, we added a track decal for Road Atlanta even though it was in another vehicle. I know for sure Margo would really like to experience this track and perhaps there will be an opportunity in the near future. There’s still the VIR track as well as Watkins Glen that we would like to try, but for now, even as fall begins to make its presence, we have one more Friday at High Plains Raceway to look forward to an then, that will be it for track days in 2014. As for Georgia well yes, each time we return to the Jeep SRT in the garage, and fire it up, we definitely have Georgia on our minds!

Posted by Richard at 9:58 AM 2 comments: Links to this post