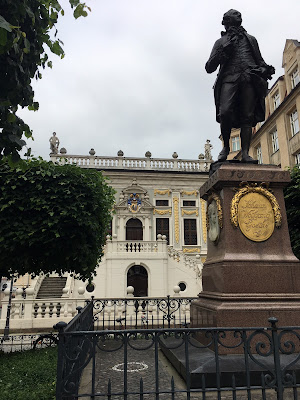 Leipzig; the home of Goethe – who knew? According to Goethe, “Magic is believing in yourself, if you can do that, you can make anything happen.” I think that this has to be one of the better quotes of all time but Goethe didn’t stop there. He also said, “Knowing is not enough; we must apply. Willing is not enough; we must do.” How cool – for years I have always thought about my high school motto, “Know Yourself” which dates back to Socrates who famously declared that the unexamined life was not worth living. When asked to sum up what all philosophical commandments could be reduced to, he replied: “Know yourself.”

Leipzig; located in former East Germany, it has morphed into an attractive city transformed in more recent times to were today it’s a wonder it doesn’t sit further up any travelers list of must-see cities. Did you know that the game of soccer, as administered today by the DFB (Deutscher Fußball-Bund) was founded on 28 January 1900 in Leipzig? Margo and I had the opportunity to spend a week in Leipzig and while we were relatively naïve when it came to its history, all the same, ultimately working with clients, it was something we just had to do.  As Goethe so rightly observed yes, “Willing is not enough; we must do!” 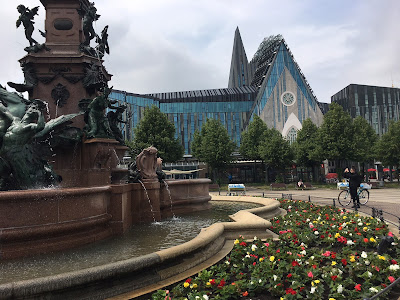 When is a church not a church and when is a university a church? There was a church on the site of the university but unfortunately, the former Pauliner Church (which apparently was undamaged during the second world) was demolished by the East German government. Following reunification, it was the University of Leipzig that chartered new territory by creating an entirely new building, in the style of a church, to better connect with the past. The University of Leipzig is the second oldest university in Germany and this new campus structure it is certainly worth taking a look and it’s just a short walk from the city center.

This highlights one of the amazing sites across the city of Leipzig, reconstructing the past and repurposing former architectural gems has given the city a new lease on life and for the moment, it was the site of cranes pulling the city up out of the past in a way that purges much of its recent history that gives it the sense of truly knowing itself. Did you know Leipzig was at the heart of Germany’s coal mining industry – mostly brown coal that fired its furnaces and powered its economy – but the city took the decision to close it all down and turned all of the mines into lakes! Leipzig is now surrounded north and south with a network of lakes that you don’t really realize are present until you fly out of the city. 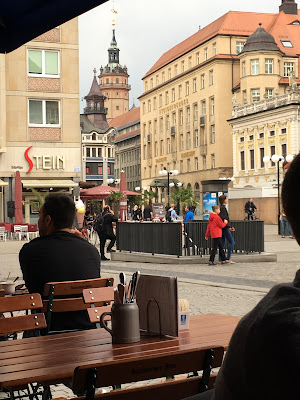 Margo and I were visiting Leipzig for a HPE regional user conference for the ecosystem of companies involved with HPE NonStop systems – consultants, vendors and yes, users. As much as many people may have forgotten about the former Tandem Computers systems of the late 1970s on through the 1980s, they live on as NonStop Systems wearing the HPE logo. Every time Daimler Benz builds a new manufacturing plant for its fabled Mercedes Benz cars, at least two NonStop systems are deployed – all those manufacturing robots are connected to NonStop systems and their every instruction is overseen by a NonStop computer. And they aren’t alone – Porsche very much relies on NonStop systems to this day. And the much ballyhooed Deutsche Bahn, the German Railway – yes, ticketing is done via NonStop last time I checked!

The city center is surrounded by restaurants and bars and on select days, becomes an open market. When the opportunity presented itself, after the activities of the day wound down at the conference, we found our way to one venue or another and perhaps the occasion that affected us most was that at 1:00 am, suffering badly from jet lag, we simply went to the city center and was able to sit down and order a meal. Try that in Ft Collins or Boulder and yet, for Margo and me, that is the quintessential characteristic of old European towns. We love it! 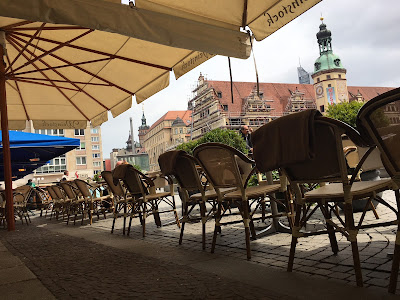 The conference in Leipzig follows other conferences in Germany that Margo and I have attended. Dating back to the early 2000s, we spent a week in Berlin in 2005 when I was the Chairman of ITUG, the International Tandem User Group and then again in 2009 for the NonStop Symposium. In 2009 I made a solo journey to Darmstadt for a similar conference just as I was setting out on the adventure that eventually led to the creation of my new company, Pyalla Technologies. Finally, in 2012 both Margo and I made it to Dresden for the same conference and these trips do not include the time we have vacationed in Germany or the many times we transited through Munich or Frankfurt. 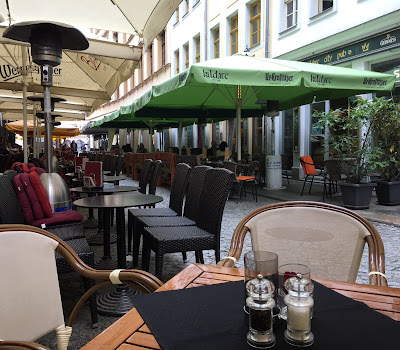 Today we have a fondness for Germany and whether it’s the pork knuckles in Munich, the sausages in Frankfurt or simply the beer everywhere, the times we have spent in-country have always been warm times for both of us. When it came to Leipzig, however, there was a special treat install for us as one of the participants at the conference underwrote an “optional tour” of the Porsche factory in Leipzig that included a couple of laps around FIA-approved circuit with a Porsche factory racer behind the wheel. 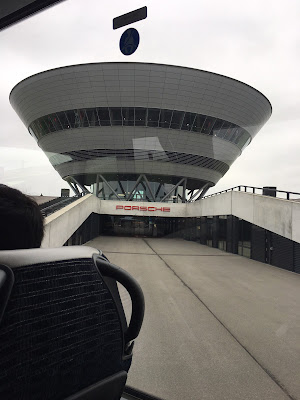 Once again, a clear sign that Leipzig was a lot different to when it was part of the former Deutsche Demokratische Republik (DDR). Just imagine it – a Porsche factory in a land that only knew the infamous cardboard-finished Trabants! OK, so it has been elevated of late to almost cult status, but honestly, there is no getting around it. The Trabant was a terrible car. But fast forward to today and Porsche builds Panamera and Macan cars where once there was nothing. While you cannot take cameras or smartphones onto the manufacturing and assembly lines there is no denying how close to ballet the process has become.

However, the true fun for the day was the ride in a new Panamera Turbo – all 500+ hp. For some reason, understanding we were from the U.S. the pro took to drifting at every opportunity so much so that entering a “bus stop” corner sequence, his approach was such that we close to entering the sequence backwards before a very rapid steering correction saw us exit perfectly. Impressive car control to say the least but when I mentioned he was giving up ground to the Porsche ahead of him, he quickly accelerated to finish up right on its bumper! 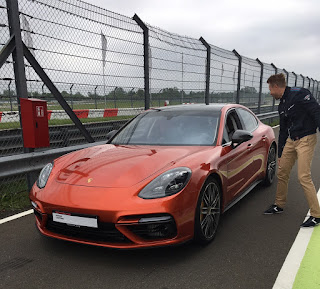 Cool cars? Oh yes! But would we buy one? Well, now that you mention it there was one Porsche that Margo and I kept going back to and even though they are made back up at the original Porsche factory outside Stuttgart, it appears you can have any of the 911 range shipped to Leipzig for customer delivery and oh yes, time on the track in an equivalent car (not yours, mind you) just for fun. Sitting in front of the entrance to the Porsche customer center, pictured earlier in this post, was a new Porsche GT3. Not the more famous GT3 RS model but just the regular GT3. Now there was a proper car!


On the other hand, it always comes back to “instead of what” as with limited garage space, what car would we give up? Having just leased a new BMW M4 (with the competition package), and finally in our hands following the mandatory BMW break-in period that limited us to just 4000 rpm, its proving a blast to drive. The i8 remains our go to car for touring but what the heck, the M4 may shortly share that role when it comes to business trips not quite so far away. But looking at the picture below, you just have to love the color scheme? 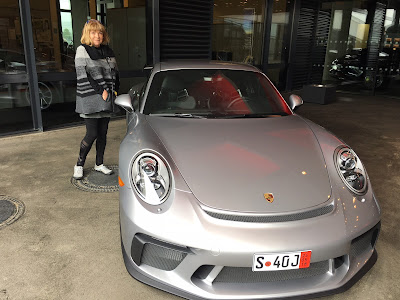 Knowing yourself in our family means knowing what next you will find fun to drive and we do know enough about ourselves to know that we derive a lot of pleasure from the many drives we take. But then, there’s always time on the track that provides us both with even more fun. “Knowing is not enough; we must apply,” means that writing about it is only satisfying up to a point but doing it is a whole lot better.

Our club, National Auto Sports Association (NASA) will be holding a track weekend at our nearby and yes, favorite track, High Plains Raceway, at the end of July and we are making plans to participate. I have now become a columnist for the NASA publication, Speed News, and my first column appeared in the June 2018 issue of the magazine – look for it if you are a member of NASA. I am writing from the viewpoint of a HPDE Driver – that is, someone who participates in the High Performance Driving Event program and hopefully, each column will prove entertaining reading.

However, with our time in Leipzig including our time with friends and colleagues who joined us for the conference and our time dining out every opportunity we had, our time on track was a mixed blessing as it only added spice to the conversation about just how soon we would be hands-on ourselves. The Corvette is now fully prepped, we have (finally) our RV back in our hands after five months in the shop and we have a trailer in excellent condition. So, yes, surely it really has become time when as Goethe encourages us all to do; “we must apply!” 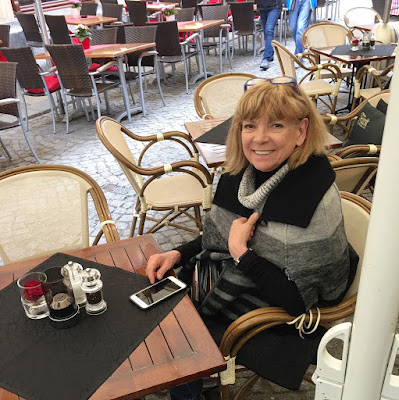 Posted by Richard at 8:57 AM No comments: Links to this post