Clubs that Accept Me as a Member

There are several versions of the story on the origin of the joke, but I like this one: Groucho Marx sent the following wire to a Hollywood club he had joined: "Please accept my resignation. I don't want to belong to any club that will accept me as a member.”
Well, we have just joined a Rocky Mountain Maserati car club - it accepts members who actually do not own Maseratis! Seriously! As an introduction, on its front page the club states: “The Maserati Club (TMC) is a club for all enthusiasts ... not just Maserati owners.” It then goes on to say: “One of the features of TMC is that we drive a range of cars from vintage 1960’s and 70’s, all the way through today’s high tech masterpieces.” 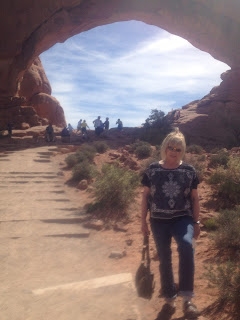 Indeed, when we joined the club and went for our first outing – the Corsa Maserati to Moab, UT, the group had a couple of BMWs, a Volvo station wagon with a large Maserati trident decal displayed on its back window, a very handsome Corvette C5 convertible, and about 5 Maseratis of different vintages. One nearly didn’t make it – as the group was departing the parking lot to form a nice procession out of Golden, CO, one of the BMWs backed into the amazing looking, vintage red Maserati Marek SS and bent its fender. It had been hard enough for me to stop Richard from drooling all over the Marek, but I thought he would lose it completely as we watched the incident develop. What a start to an exciting weekend!

On the other hand, given that it was the Memorial Day weekend, it was also the official start of summer, and getting an opportunity to drive a club-accepted grand tourer, even if it erred on the sporty side, proved to be a great treat. After a protracted winter, when all we could drive was our AWD Cadillac Escalade SUV, an almost parade-like drive through the Rockies gave us a sense of much-anticipated renewal.
Moab proved to be even prettier than I imagined having only looked at pictures on the WEB and listening to my friends who visit there frequently. As much as we were chided for not wanting to traverse the rocks on a mountain bike or go crawling up canyons in a Jeep, there was still plenty to be seen from the car. Especially refreshing for us was that even with an organized club event such as this, we had a lot of free time and all of Saturday we were left alone to explore the place. So we elected to check out Arches National Park.

I decided to try the Sketch app, which I downloaded to my iPhone, to give you an artist view of the scenery behind me. 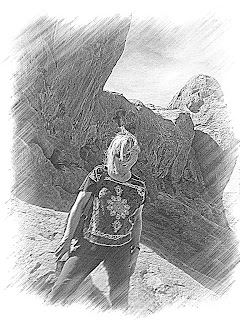 When Sunday arrived with the start of the Corsa Maserati three-stage rally, the rules turned out to be a tad more exclusive than the club membership rules– you can participate and compete no matter what car you are driving, but you can only get a prize if your car is a Maserati. Go figure!

I am not into games, in fact I usually pass on participating -- I didn’t even play any games at my daughter’s Baby Shower that all the other women played and seemingly enjoyed! This time I tried my hand at the rally game, and I have to tell you – there is a reason I don’t play games! Particularly with a know-it-all of a husband interrupting at every opportunity! The instructions were fairly simple: go 1.2 miles and answer a question, then go 1.5 miles and answer another question and turn into some street, then go 1.2 miles and answer …

After adding 7.5 miles then 7.6 miles and so on, some 70 miles later we realized the mistake and re-started. Needless to say we were over an hour late to the meeting point and the start of part 2 of the rally, but on the other hand, we did see other arches close by the highway. We were the only team to visit Wilson Arch as it turned out!  So, at that evening’s dinner, where the results were announced (see the picture here) … 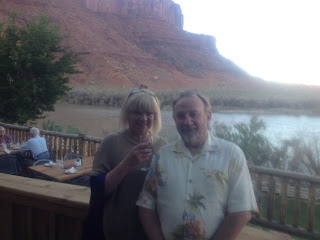 yes, we were miserably the very last to complete the course, making us the biggest losers! I hate games!

Perhaps it was the experience of the rally that lasted all day, or perhaps it was just the perfect weather we were enjoying, but when it came time to head on home, we elected to drive in the other direction, pointing the car south rather than north back to the Interstate. It had been a long time since we had visited Durango, and a drive up over the mountains that separate Durango from Silverton and Ouray seemed the logical best way to drive home.

What was it like? Pretty fantastic! The forests were green and the mountain lakes were beginning to fill and turn many shades of beautiful blue in stark contrast to the muted red and gold shades of Moab.

Fortunately, the company of our fellow members of TMC compensated for our inglorious defeat the day before; we had a great time, and decided we will not send Groucho Marx’s infamous letter of resignation. On the contrary, we plan on participating in another outing with the Club at the end of July, to Leadville, and we are looking forward to good fun, good wine, and the company of folks who, like ourselves, enjoy cars, wine and good food. Did I already mention that MTC members like wine? That’s an ominous sign.