With Spring come flowers and a time to drive … 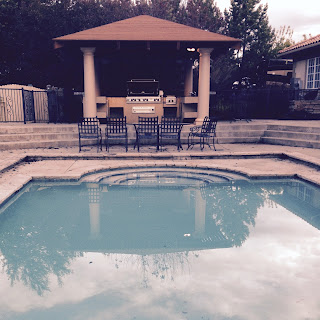 The local Colorado weatherman glowingly reported on how “with April showers, May flowers”. However, what he didn’t count on was just how many showers we would experience – rainfall records all across the state were smashed this May as the rain just kept on falling. In my last post I wrote how April is typically the snowiest month of the year, even as May can prove to be the wettest, but little did I know just how wet. With May almost over, we were informed that there had only been two full days of sunshine, but for the life of me I couldn’t recall those two days.

Fortunately we were able to open the pool and as the picture above so accurately captures, yes the clouds are still with us and it rained a short time later. The good news, particularly if you should live in California, we didn’t have to top up the pool with water prior to the opening – there was more than enough water in the pool for our pool man to complete the opening. Relief from the snow was definitely a blessing even though it means giving the garages a thorough cleaning (which, at the time of writing, I have yet to do), but that’s another story.

What the winter did do is kill off a number of our trees and shrubs and even thought we have fingers crossed that they will recover, the count so far is two big Aspen trees lost, as well as numerous other bushes that I have no idea what they are called. When fall returns then this year for sure we will have a substantial clean-up to do. That is, unless, the house sells but coming up on two years, that too is a story for another time. 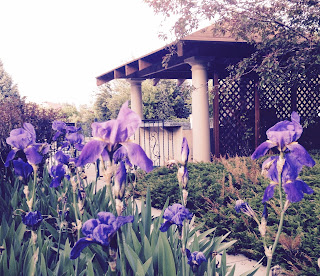 All this adds up to is yet a lengthier period of time living in limbo not knowing what our plans for the future will be. All we do know is that we have a beautiful home that is just too much for us and where our usage of all the space is simply beyond us, but who could have guessed? The high-tech industry has moved out of Boulder County and there’s few signs that any relief – i.e. buyers – coming soon. Then again, as Margo and I so often remark, second prize isn’t too bad as this simply means we get to live a little longer in our Niwot home. And with time, the trees mature and the flowers take hold and with the rainfall we have had, the irises are doing very well, as captured in the photo above.

With the coming of spring, it’s not just a time to view the flowers but also a time to participate in trade shows, exhibitions and user events and with the end of May, we were heading once again to Las Vegas for the biggest event of the year – the semi-annual HP big-tent event, 2015 HP Discover. It run through early June and it gives us a chance to spend time with HP executives and managers which in turn, give me a whole notepad full of ideas for future business posts, commentaries and articles so it was well worth the temporary pain of returning to Las Vegas, once again.

However, while Colorado works hard to reach temperatures in the high 70s Fahrenheit, the deserts of southern Nevada are already baking under clear blue skies. Spring may be a time to drive but anytime the trip is to Las Vegas we have to plan for hot weather. Arriving at our campsite – a new experience as it is a different location to that used in times past – there was little foliage above us to protect us from the sunshine but as the picture above highlights, we weren’t alone in planning to live out of the company command center for the duration of the HP event. 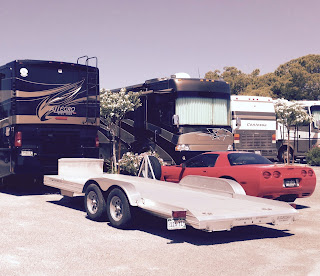 As we had to join others for a client luncheon upon arrival, it was a very hasty unload of the Corvette (and yes, I gave it a quick hosing as we had come through rain and sleet as we crossed the continental divide), as well as a rapid set-up of the RV itself and right from the outset, things started to go wrong. There’s a reason why folks typically start out with a small, manageable, RV before stepping up to a coach and we were going to be given a serious lesson about the downside of skipping the introductions. One by one, systems we had always relied on began to play up and Margo was very unhappy.

No pressure in the water system, with the shower barely providing more than the occasional drip. When it did provide water, there was little evidence of any warmth. After experiencing outages with the refrigerator and the A/C unit previously I was somewhat relieved to find that they worked just fine but in the end (and without going into the details), the problems all resulted from my initial hasty setup on arrival. Switching off the electrical power and shutting down the gas supply for ten minutes and then restarting everything saw the RV return to normal and my wife was indeed grateful. Dare I add, very happy to boot!

To say it was “toasty” in Vegas was an understatement – it was oppressively hot with a couple of days soaring into the low 100s Fahrenheit. But inside the RV, Margo’s good humor soon returned as she waived around a couple of nicely toasted slices of bread. Ahhh, bread with a chilled gin and tonic – life is good! This trip was going to be all business, with days starting early as we took in business breakfasts and ended later as we did the rounds of vendor and community receptions on offer. 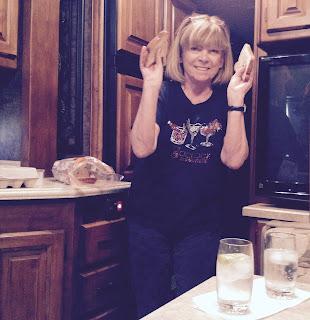 Margo and I have always enjoyed this side of the business – Margo is a lot more people focused than I am and yet, typically, we find a lot of time to converse with a variety of folks and collectively, we have proven to be a potent team when it comes to assessing the pros and cons of companies, technologies and products. While I had a full registration pass for the duration of the event, as circumstances developed, more of our business endeavors were conducted just outside the venue than on the exhibition floor and we essentially owned a table in the Venetian Grand Lux Café from first light to well past lunchtime.

To make up for simply grabbing what we could eat when we could, we were more than fortunate to have been able to dine twice at our favorite steakhouse in Las Vegas, the Mastro’s Ocean Club in the Shops at Crystals – the second time in order to take photos of us sharing martinis for our good friends, the Kennys of Simi Valley. But the serious side of HP Discover was never far from our minds and took up a lot of our time but proved to be well worth our commitment to the event.

However, driving our track car, the Corvette Z06, around Vegas as our only means of transportation left me with a hollow feeling – this car really deserves a lot better and hopefully, as the family situation becomes a lot more clearer and we have a better idea of where we may be living in the future, it will once again become the track car we so much enjoy driving. 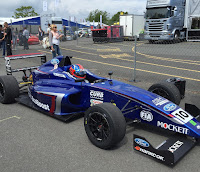 Talking of track days and of our good friends, the Kennys, we have been getting further updates about the exploits of their grandson, Colton Herta. Having left for the U.K. only a short time before we departed Las Vegas they were able to catch up with him as he prepared for a weekend of racing at Oulton Park in the pretty county of Cheshire. Those with a keen eye will not only pick out Colton already seated in his car (before the first race) but what I believe is his grandmother Jan walking directly behind him. Even though Colton has just turned 15, this is very much the serious side of racing as this class is a stepping stone to the more senior F2 events.

After some outstanding test times on these circuits, where he recorded a couple of P1 times, and with a P4 already under his belt, Colton was knocking on the door for his first podium finish and this past weekend he succeeded for the first time securing P3 in the first outing of the weekend. Colton now stands in 8th place in the championship and as the only American competing in the Formula Ford / MSA series, a couple of solid results could easily see him jump to 5th and then be a lot closer to challenging the leaders including his own teammate pictured on the podium with him having secured 2nd place. 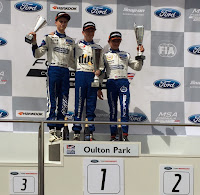 Before they left for the U.K. I had told Brian that, for the race weekend before Oulton Park I thought Colton would land a place on the podium, but it turns out that I was just one event ahead of myself so yes, huge congratulations to Colton, his family and the team. Honestly, having been one of those who watched the film Grand Prix on six occasions over the summer holidays back in the mid-1960s, and dreamt of driving in F1, I can only imagine how Colton feels behind the wheel of these machines – and yes, in a short time, I fully expect to being able to watch him on TV! . It’s only a matter of time.

And yes, you know you are a real racer when your racing suit has your surname sown down the edge of one leg of your suit’s trousers – check out the picture above and zoom in! Even as I wait to return to the track in the Corvette my aspirations are for nothing more than having a good clean accident-free run and again, hopefully it’s not too far away. But driving the big coach, trailer and Corvette in tow, and simply having time to enjoy parts of America few get to visit is reward enough of itself. Next month, we will be heading south to Dallas, with a side trip to Austin, and already the thought of getting back out on the road is occupying much of our attention.

Very soon, spring will be behind us and the summer sun will be baking the landscape. Really, I don’t mind the rains – the floods, on the other hand, well that’s an entirely different story – and there are predictions once again for a few more wet days to come. The irises have bloomed and will shortly have died and the pool will be warmer. BBQs will begin in earnest and languid days will be spent poolside next to the bar. And who knows, our home of a decade and a half may eventually sell and a whole new chapter will begin, but until then, it’s back to raking leaves and pulling dead frogs from the pool all the while knowing it’s time to drive!

Posted by Richard at 9:01 AM No comments: Links to this post