Showing posts from March, 2019
Show all

Yes, spring is coming so let’s get out there and see the snow one last time! 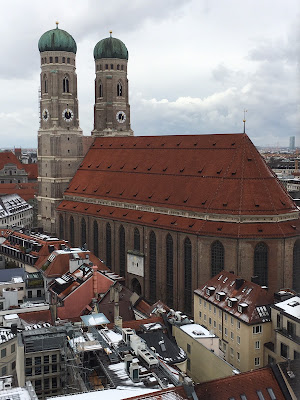 The opportunity to catch up with good friends and former business colleagues meant that Margo and I made a quick dash to Munich, Germany, where we tackled a little bit of business and we had the whole of Munich to explore. My first trip to Munich was back in early December, 1981, and as best as I can recall, it has been a place I have returned to every couple of years. There was a time when I worked for Nixdorf Computers during the period where they manufactured their own IBM Plug Compatible Mainframes (PCMs) and this endeavor just happened to be centered in Munich. The division was called Compatible Information Systems (CIS) as I recall, although locale Nixdorf folks were often heard explaining that CIS stood for Compatible Information (to) Siemens. On arrival into Munich’s old airport, I was often greeted with snow and this was pretty much the case this time, too – snow fell a couple of times while we walked the city.   It is hard not to be impressed with the old town of
Post a Comment
Read more
More posts