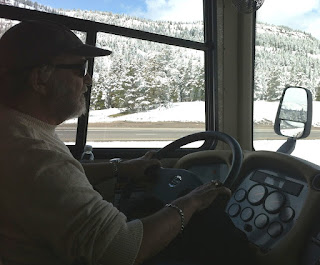 The week before heading out to southern California had been spent in Nashville, Tennessee, where afternoon thunderstorms had provided the only relief from days that had temperatures climb well into the 90s. Fortunately, for most of the week, business had kept us indoors, but even on those occasions when dinner plans had necessitated a trip outside, the humidity was just as oppressive as the heat. However, driving over the continental divide, with 60 feet of rig, provided a weather experience from out of the other end of the weather spectrum. Snow!

The picture above was taken by Margo as I drove cautiously down from Vail summit into the township. Snow continued to fall, and while there was no snow on the road, several times I felt the full rig wriggle just a bit – clearly, not the best of conditions. From the humidity and heat to the snow of the mountains, and that was just the beginning. The following morning, as we pulled out of our overnight truck campsite, a gale hit us fair on the beam as we traversed Interstate 15 from Beaver, Utah, to Barstow, California.

Willow Springs holds fond memories for Margo and me, and this weekend would be the fifth anniversary with National Auto Sports Association, Southern California (NASA SoCal). Readers may recall the post of June 6, 2008, “Off to the races ...”, where I described all the emotions that surfaced our very first outing onto any circuit anywhere in the world. However nothing prepares you for a real outing and the memories came flooding back.

In the post of 2008 I had come away from the weekend where “we hadn’t put a wheel in the dirt and we knew we could improve significantly. While we couldn’t say we had been completely ‘hooked’ by the sport, just yet – we did recognize some of the signs.” I also had observed that with “so much focus is made on safety, and on communications, that it’s a lot to take in, but as you become comfortable with your surroundings and confident in the skills and intentions of your fellow novices, the element of fun really begins to surface.” 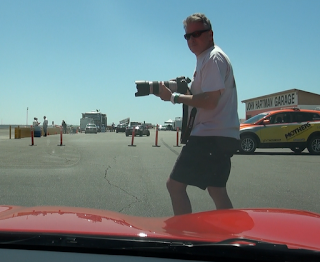 While just returning to Willow Springs meant we were once again in familiar surroundings there was just as much fun catching up with acquaintances we had made along the way. The regional director for NASA SoCal, Ryan Flaherty, had encouraged us to continue our participation in the High Performance Driver Education (HPDE) program, and Ryan, along with instructors Fulton Haight and John Matthew were pleased to see us back, and as cantankerous as they can be on occasion, their heart remains in the same place. They just love the program and want to see us get the most out of it; “cooperate and communicate!” and “drive safely, drive fast, and have fun!” have now become permanent expressions within my vocabulary.

The picture above is of Brian Kenny walking across the front of our car that was already staged in the hot pits ready to head trackside. Brian and his wife Jan have appeared many times in these posts, as indeed, our friendship developed as each family brought Corvettes to the track and we shared much the same passion about getting out on track and having fun. Brian is a lot more serious than I am and now has a garage where trophies from other events – the Corvette Challenge – line his workbench with so many now, he is contemplating taking down the Second Place plaques so that those rewarding First Place can be easily seen.

Brian and Margo went out for the sessions on Saturday – Margo in HPDE2 and Brian in HPDE3 – and Brian was generous enough to let me ride along with him for all but the first session. This weekend would be a milestone for me as following exchanges with Ryan and John I would be under the tutelage of Fulton, running all day Sunday in HPDE 3. 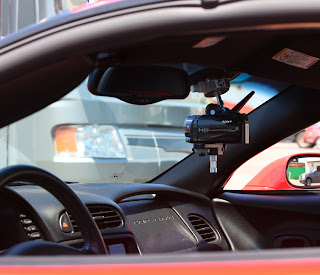 The picture directly above is of the camera Brian had mounted in our Corvette to record one of my Sunday sessions. It is a measure of just how much fun the two families now have on occasions like this that Brian and Jan elected to stay for the Sunday, even as it was the day of the Indianapolis 500 where their son in law, Brian Herta, would be fielding a car and as team owner. Only one year ago Herta had recorded his first win at Indianapolis!

The picture below is of the Corvette gridded for the start of a session Sunday morning. When the track official signals five minutes to go, both Margo and I experience the same discomfort as we prepare ourselves mentally for the next twenty minutes on track. With a garage full of high-performance cars and with no other legal outlet to experience how well they perform, through the past four years NASA has provided us with just the right element in which to drive them as the manufacturer intended.

Sunday would be very special for me as it represented my first outing with NASA in HPDE3 – after two years as a novice in HPDE1 followed by two years in HPDE2 as a beginner, my presence in HPDE3 intermediate level may have taken a long time but the NASA instructors were loath to accelerate any participants’ movement up the ranks without many long hard looks at just how competent the driver had become. 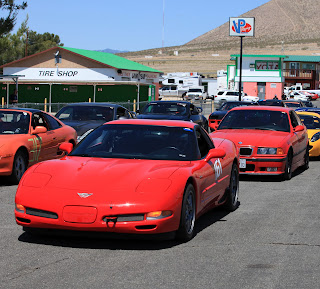 Apart from the message of cooperate and communicate, there was now the message of consistency and carrying speed consistent with others in the group, there was also the awareness of gaining acceptance from your fellow drivers. Staying off the “tower report sheets” was one important element of remaining in HPDE3, and I was determined this Sunday not to hear my number called for any incident on track.

The weekend really was a testament to the friendships that have developed through the years from our outings with NASA. There were many participants aware of my move up to HPDE3 and they came by to offer advice. While it wouldn’t be until Sunday before I would be on track, I made sure on Saturday that I could get to see as many laps as I could as a passenger of someone already in HPDE3, and preferably, one among the more proficient among the participants. To this extent, riding as a passenger with Brian proved to be the perfect transition – a similar car in the hands of a highly experienced driver.

When it came to that first session Sunday morning, Brian came along as my passenger. I would take the first two sessions as quietly as I could; not obstructing anyone but rather, a few seconds off the pace of my fellow drivers so that I wouldn’t put a tire into the dirt or get caught up with any more-competitive drivers. After all, while HPDE3 is for intermediate drivers there are those participating who are borderline ready for promotion to the advanced HPDE4 / Time Trial group and they circulate at a speed far removed from what I am prepared to contemplate this early in my development.

“Now remember,” Brian advised me as we pulled out of the pits to start that first session, “you don’t have race tires and brakes, nor do you have the track alignment or suspension set up that I have on my Corvette, so don’t try to emulate what I did on Saturday!” However, running a stock Corvette C5 Z06 with street tires and the original brake rotors and pads (just the fluids upgraded to better suit track conditions), it’s off-the-showroom capabilities still surprise many uninitiated with just how well GM put together this track-oriented Corvette. Before I reached the midway point of the first lap, just as I crested turn six, everything was up to temperature and the car handled beautifully. 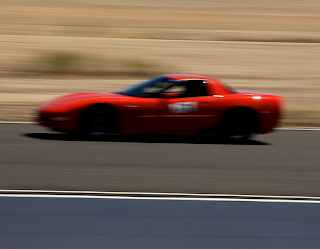 Letting my mind replay the many laps I had enjoyed as Brian’s passenger also let my subconscious kick-in with where best to hit the brakes and to turn in. So many drivers forget, even in HPDE3, that it is still all about your eyes and what you see – the car will follow where you are looking – and for me, this is the real secrete of what I have learnt from sessions on the track. Brian’s presence for that first session was a bonus; his reassurance through every lap only further helped in developing my confidence.

“Time and time again, as you came to a turn I was thinking now, this is where I brake and this is when I begin to turn,” Brian was later to tell me “and each time, you mirrored my lines exactly.” I never carry a transponder as I am in HPDE to learn, but all the same, watching film after the weekend, I wasn’t all that far off the pace of more experienced drivers. For the second session, Brian installed a video camera and now I have film of me executing lap after lap consistently. And the picture below is a still lifted from that footage.

For the third session, senior instructor Joe took the passenger seat. Joe and I had met at one of our earliest outings and it’s now hard to recall just how nervous Joe had been, first time out on the track circulating with all of us HPDE1 drivers. With no incidents during the previous two sessions and my number having not been called at the session downloads, I was now feeling more at ease and with someone like Joe alongside, a fellow Corvette driver albeit, driving a well set-up Corvette C6 Z06, it turned out to be a fun session where I improved so much that during the download, a fellow Corvette driver, much more experienced than me, thought it had been Joe driving my car.

Whereas in the previous two sessions, this fellow Corvette driver had easily caught up with me, during the third session he hadn’t been able to lose me and on two occasions had considered giving me a point-by. True or otherwise, our instructor Fulton who had been on track during the session came up to me and agreed with my fellow participant, “yes, you looked good out there.” The final session proved to be an anticlimax as every driver ratcheted it back a notch or two and yet, I really didn’t want it to end. 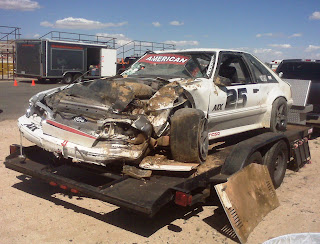 Only a few days before I had struggled in the humidity of Nashville and then only hours before I had shivered in the freezing rain, and then snow of the Rockies. Now I was in desert heat with almost zero humidity but rather than worrying too much about just how quickly conditions change, this weekend at Willow Springs could have been anywhere and Margo and I couldn’t have been happier.

Yes, there was the usual drama, as the picture below depicts, as one competitor in the American Iron series crashed out but for us, without putting a wheel out of place, the weekend couldn’t have been any better. And thanks to an email from Rob Rosen here's a video clip of the incident with a follow-up interview. Pretty impressive and a testiment to having good safety equipment. Check out:
http://www.autoweek.com/article/20120705/CARNEWS01/120709949?utm_source=DailyDrive20120705&utm_medium=enewsletter&utm_term=article1&utm_content=20120705-Ford-Mustang-5.0-flies,-crashes-at-Willow-Springs&utm_campaign=awdailydriveIn particular, check out the discussion at the 3 minute mark and the subsequent footage of "the jump" and then again, the slow-motion of not just the jump but the impact with the wall at the 5 minute 50 second mark.

There will be occasion for one more event with NASA SoCal later in the year, and if we can manage that, then it will be a weekend we will be hard-pressed to expect enjoying any more than what was our fifth anniversary ride with NASA. And to all who officiated that weekend and who counseled us every step of the way, our heart-felt thanks – we cooperated and communicated; we went fast, and we were safe. There’s not much else we could have asked for!
Posted by Richard at 3:02 PM No comments: Links to this post