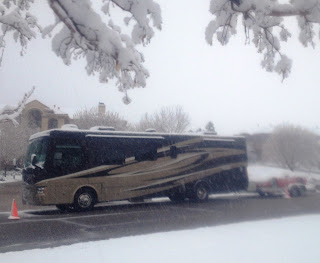 I have to believe I am a shallow person; truth be told, I have all the necessary characteristics to satisfy this categorization. Possibly, superficial as well as I have been told on more than one occasion. Moreover, these are not bad traits to discover you have. Well not necessarily, as I just found, given that one of Television’s most beloved actors, Hugh Laurie (of the series House), also admitted to exhibiting the same characteristics. Being shallow, it turns out, helps you to handle change a lot more easily.

In an interview of May 3, 2013, published in the UK newspaper, The Telegraph, Laurie admitted to the reporter: “'The strange thing – and this is one of the advantages of being incredibly shallow and superficial – is that wherever I am, that’s sort of home. I get back to Heathrow and within 10 minutes of going along the M4 I feel like I’ve never left England. I get here and within 10 minutes of going along La Cienega, I feel like I’ve never been away. But that, as I say, is because I’m very shallow.’

In my lifetime I have lived in London, where I lasted just over six months before I immigrated to Edmonton, Alberta, where I lived for almost two years. From Edmonton, it was a simple step to head to Dallas, Texas, for just a couple of months. This was back in the mid-1970s but in the mid-1980s I again returned to the United States and spent almost a year in Raleigh, North Carolina. Later in that decade, I returned to Cupertino, California, and I haven’t returned to Australia since, although I do enjoy playing tourist on occasion. However, moving from one place to another is easy for me to do, just as it is to throw a few belongings together, pack some food and beverages, and jump aboard the Command Center (yes, the RV) and drive almost anywhere. 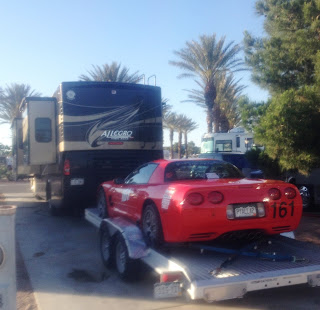 Being shallow and adjusting easily to change has also led me to forego any long-term planning exercises, I may very well simply change my mind. As the picture atop this post attests, I did elect to drive to Southern California this month. Our granddaughter had just arrived and there was no way Margo was going to miss any of the first weeks in her first grandchild’s life, but after the early days passed, I decided that perhaps I should make plans to participate in the National Auto Sports Association (NASA) weekend event at Willow Springs International Raceway (WSIR) in Rosamond, California.

I may be shallow and I may find it easy to accommodate change but that doesn’t mean I don’t have routines. Rarely followed precisely, mind you, but generally speaking I usually get the job done and nothing makes me happier, as track weekends approach, than hooking up the trailer to the RV, loading the track car, filling it full of food and drinks, and getting a good night’s sleep. However, not keeping an eye on the weather is one of the downsides of being shallow as, who knows! It’s Colorado, and it is always changing.

Imagine then my surprise when I awoke to find the RV, trailer and track car buried under 8 inches of snow. Forwarding the picture at the top of this post to fellow participant, Brian Kenny, generated the observation that never before had he seen a track car, with numbers applied, covered in snow. Making a bad situation worse, Interstate 70 (I70) was closed, making any plans to cross the Rockies impossible. Instead of a leisurely 850-mile trip to Rosamond, it would become a 1350-mile protracted sojourn, as I followed a southern route that included stops at Santa Fe, Albuquerque, and an overnight stop in Las Vegas. The picture above shows the big rig enjoying Vegas 80+ Fahrenheit temperatures. 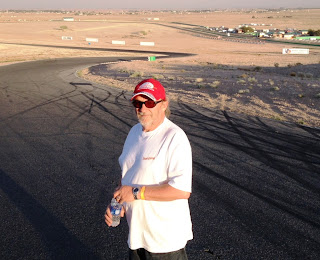 All the effort put into making it to WSIR was done simply as it is one of our favorite tracks anywhere in the west. Even as the High Plains Raceway (HPR) circuit outside Byers, Colorado, has become our home course, WSIR was the very first circuit we ever visited and it holds many fond memories for us. Without Margo making the trip out, leaving me to fend for myself, was yet another chapter in the long running story of our WSIR escapades and this weekend would only add to the pages devoted to covering fun times at Big Willow.

Arriving late on Friday totally drained and near exhaustion, I still found the energy to “walk the track”. This has always been something I had wanted to do ever since NASA NoCal instructor, John Matthews, suggested it during our very first trip to the track. This is now our sixth year with NASA and I hadn’t done the walk, so this time there was no excuses. And what an education it proved to be! Gaps had opened up in the pavement in some places, edges had crumbled away in others, and the camber of the track couldn’t have been laid any worse by a drunken sailor. Just when you thought you had something figured out, a few steps later, it all changed – and for the worse.

WSIR only has nine corners but everything in between is a real challenge, and after the walk I came to appreciate why so many lines existed around this circuit. Yes, there was the student line, the qualifying line, the race line, but in between there were several other less-orthodox lines that many drivers came to know, and in turn to exploit! Turn two, the big sweeper, with its decreasing radius? Well, for big torque cars like our C5 Corvette Z06, there was the potential to eke out a better time if taken as a dual apex turn.

So how did we do? On track Saturday I was anything but spectacular as the effects of the 1350 mile trek still held me in its grips. Sure, rolling down Interstate 25 (I25) and then onto Interstate 40 (I40) had its moments, where following hours of snow and sleet, the high winds across Arizona proved to be the most challenging of all. Sixty plus feet of high profile rig is not without its downside. The result of my being a tad fatigued was a very big spin entering turn 9 during the third session Saturday as I committed the cardinal sin of following the car in front of me, being driven by Brian Kenny, and forgetting my own brake, turn and rotate marks. On the other hand, Sunday proved much better and late in the day, those timing me by hand reported my times dropped to the low 1 min 44s – with a further drop in the third session Sunday into the 1 min 43s. Not bad for someone who, only recently, was lapping closer to 2 minutes. 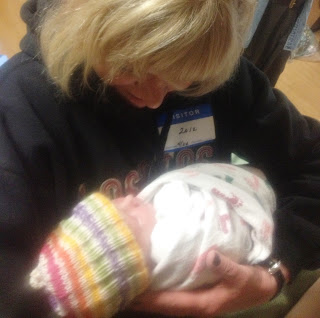 All the while, I had been texting Margo to let her know I was safe and making progress. And from Margo, the news was all about our grandchild, Ella, of course. For all those miles I had driven, across the Wild West, Margo told me she was up front with me the whole time. If only she had – I sure do miss the caps of hot coffee and the sandwiches made from freshly baked bread. A task Margo now accomplishes with ease as we truck down the interstates. But truthfully, she really did miss the adventures that come from such trips. Of course, she didn’t regret missing the opportunity to drive the rig during the snowstorm.

As for Ella, she continues to grow and to change the lives of everyone around her. Something we were well aware she would be doing long before her parents truly understood the scope of change involved. But Margo does love every minute she spends with Ella, but in truth, cannot wait for the day when she will enjoy her first conversation with the grandchild.

We had both hoped out first grandchild would be a boy – even thinking that our own name for him would be Enzo – and that we would introduce him to track days at a very early age. Perhaps even get him into Karting as a pre-teen. Now that we have Ella, this may indeed happen, if she elects to try her hand at something her grandparents enjoy so much. These are much different times and even now, among the racers with NASA, there are a growing number of young, combative women behind the wheels of many of the racecars. Watching them race I for one have to admit that I quickly lose track of who is driving what, as there’s simply no difference in skill levels on show during each of the races. 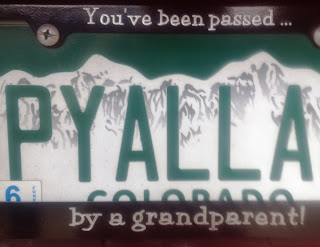 The return trip took in an overnight rest stop with Brian and Jan Kenny. For the days leading up to the event I had been on a tough regime of antibiotics and so I was limited as to what I could eat, and adult beverages were definitely off limits. So imagine their amusement over dinner, at Mastro’s in Thousand Oaks, as I ate fish and drank water – a far cry from the traditional bone-in rib eye steak and apple martini I usually enjoy.

As for the return trip, following another overnight stop in Las Vegas, I pushed on hard the following day and made it back all the way to Boulder. Earlier in the year I had driven 720 plus miles from Elko, Nevada, home, but this time, it was a little longer – 750 plus miles. Nevertheless, making it home safely helped minimize the time away from my consulting work and that has its upsides too. Yes, I did get to visit with Ella too, and it’s so clear how much she grows with every passing week.

Margo had previously blogged about the new license plate frame we had ordered and it finally arrived a few days after I returned from Big Willow. The picture above shows it now mounted to the back of the Corvette – a site hopefully many of our friends on track will get to see. Yes, “you’ve been passed … by a grandparent!” Perhaps admitting to being shallow and superficial doesn’t tell the whole story. And perhaps this really isn’t me at all. However, if it has to do with easily accommodating change, whether it’s the journey, or the location, or even family, then perhaps the label fits. Then again, there’s always the next trip to the track, and already I am working on the plan!

Posted by Richard at 5:16 PM 2 comments: Links to this post