On the road, again! Again? 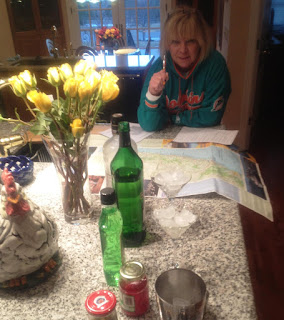 There was no RV this time just as there was no racecar in tow. The sports cars and roadsters were all feeding from trickle chargers, more or less leaving the garage spaces a web of crisscrossed power chords. Snow had already fallen, more than once, in Boulder and with the onset of the holiday season, temperatures had fallen. As expected. Winter was an undeniable presence and somehow, even as we took the occasional side-glance at the winter landscape surrounding us, we were already getting a little stir-crazy. It was time, after all, to get back on the road again and as the picture above depicts, this is always an occasion to pull out the maps and shake a much needed martini.

Business necessitated a weeklong trip to the Bay area and to Palo Alto. We had elected to spend the days following Christmas in Palm Desert, so all that was required of us was to head west, through Los Angeles, and then a run up through the San Joaquin valley, cutting across to Gilroy before pulling further west to Los Gatos, where we would be spending most of the week. The Dio Deka restaurant remains a favorite of ours, so we spent one night there enjoying their lamb cutlets.

Unfortunately, a wicked cold sank its hooks deep into both of us and we suffered accordingly. Being conscientious about health Margo and I had endured our annual flu shots, but these proved to be to no avail. It also hit hard some of the business folks we were to meet with, and our schedule of meetings suddenly became a series of blank spaces, so much so that we will be returning to the Bay mid-February. The final drive back to Boulder took us up over the Sierras and on through Utah and Wyoming, but as dusk was about to fall on day two the snow began to fall. Slowly at first but as we passed the airport to the west of Salt Lake City we ran headlong into a full-blown blizzard.

We watched aghast as drivers of rear-wheel cars tried to drive home - a couple of Mustangs, the occasional BMW and Mercedes (that were not the all-wheel drive versions) and a new Camaro – only to end up well off the highway. It took us fully three hours to navigate the thirty miles we had to travel, after passing the airport, before we had a familiar roof over our heads. Casting an eye over weather reports, I have to admit I was concerned how we would go climbing out of Salt Lake City and up into the high plains that would take us into Wyoming. Fortunately, there was little traffic on the roads as we left and the rest of the journey was completed with relative ease.

As for the picture below, already posted to other sites, including Facebook, is of the trusty Escalade SUV as we found it that morning we left Salt Lake City. Of course, nearing ten years old, with more than 160,000 miles on the clock, it’s getting on in years (and yes, the maintenance bills are beginning to climb) it’s proved to be the most reliable vehicle we have owned, and with full-time AWD there’s very little we encounter on the highways that we cannot plow on through. It would be tough to replace, but of course, that day will eventually come, but until then we will keep relying on it every winter when it comes time to get back on the road again. 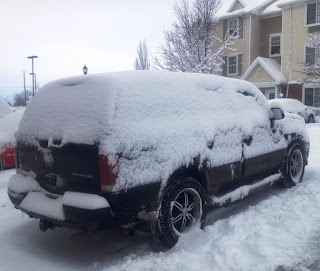 However, it’s hard to miss the early signs that winter will soon be behind us. Evening cocktails – religiously served at five o’clock each day (and prior to our business calls back to Australia) – were shaken in darkness just one month ago. Looking to the west last evening, there was still residual color in the evening sky even as the snow-covered peaks along the continental divide reflected the last light of the day. "In the Spring a young man's fancy lightly turns to thoughts of baseball,” to paraphrase the poet, Alfred Lord Tennyson. Well, that is how I heard it stated in a Disney cartoon many decades ago.

As it so happens baseball isn’t really what captivates us, but with the roads being dusted of grit following the several snowfalls that have occurred here in Boulder, it’s thoughts of car trips in the warmth of spring and of upcoming track events this year that brings us back to the present. With the success we enjoyed driving the older Corvette, C5 Z06, in terms of what little had to be done to our track car over the course of a year’s worth of track sessions, it will again be the car we will campaign for all of 2013. After an initial dusting off with perhaps a lapping day out at High Plains Raceway (HPR), it will be simply a case of changing some of the fluids before we turn out for National Auto Spots Association (NASA) weekends.

Last year had been momentous too for another reason. It wasn’t just the fun we had behind the wheel of the C5 Z06 ‘Vette, but the practicality that came with having an RV for the very first time. It was a little over the top – starting out with a 38’ Class A “diesel pusher” bunkhouse coach – and yet, turned into our office away from our office, gave us the opportunity to rely on airlines even less than we had the previous years. For those unfamiliar with business trips by air, there is just no fun in doing so any more. It’s so much better to be on the road again, and we racked up 12,000 plus miles in the RV for the few short months we were on the road.

Towing the trailer with the car onboard, we were routinely on “long and lonesome highways west of Omaha,” to paraphrase the well-known song by Bob Seger, and yes, we were very much listening “to the engine moanin' out his one note song”. We became regulars at WalMarts all over the western states, often pulling into their customer car parks to take advantage of the RV-friendly policy. And yet, all the while, we kept wondering why we hadn’t done this years before – the ability to cook warm meals in just a few minutes and to have easy access to shower and toilet well, it’s proved to be a godsend as we cover so much distance in the course of our business pursuits.

When it comes to best conveying the whole operation, the picture below pretty much sums it all up. Settled into an RV parked just outside Morgan Creek, California, we have pulled the ‘Vette off the trailer, parked it in front of the RV, and then pushed the trailer into a free space adjacent to the RV. Even though the ‘Vette serves a very good purpose as our track car, when we travel like this it does double duty as our commute vehicle, reliably transporting us to business meetings up and down the Bay. For almost a full week, the RV became our business command center and even though it’s now winter and we have to rely on the SUV to commute to California, the RV is sorely missed and we can’t wait for the warmer weather to return. 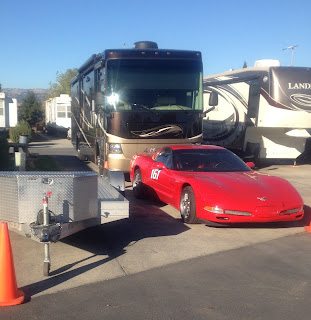 Returning to the picture at the top of this post of Margo looking at the map, astute readers may recognize that this map isn’t of the western United States. Given that it is still winter and that there are still weeks to go before warmer days return to the front ranges, this particular map is of the east coast of Australia. It has been a long time since we have had an opportunity to return to Australia – after 50 plus return trips across the pacific since the early 1990s you would think we have had enough by now – but family and business needs have aligned in just the right way to make planning for such a trip a necessity. My mother is still very much alive but this trip may very well be the last opportunity Margo and I have of seeing her so in one way, this trip does carry with it just a little more significance than prior visits.

As we plan for the next winter trip to California, Nevada and Arizona – we will be attending this year’s ATM event in Scottsdale, an association where I remain a regular blogger – the trusted Escalade is at the dealership for service. Prior to the last trip, we had to have an intake manifold gasket replaced and now we were informed the water pump was on its very last legs, with coolant already leaking visibly along connecting hoses. So perhaps there are only so many trips in the old Caddy left. It will be a shame to ever facing parting with such an important member of the family that has consistently provided a reliable means of transportation but the end is beginning to become apparent.

But on the road we will stay and getting back out on the road again will continue to be a regular part of our routines. We have seen most of the highways between Colorado and the cost and at all times of the year. The trips are never boring or something we ever regret doing. There’s always something different to see every time whether it’s just summer’s colors as the rock plateaus of Utah reflect a rainbow of shades or springtime’s presence of water on Nevada’s deserts, or even fall’s changing colors of the tress atop the Rockies. The destination, as the cliché goes, has never been all that important but the journey? Well yes, it’s all about the journey and shortly we will be back on the road, again. Again!
Posted by Richard at 9:43 AM No comments: Links to this post