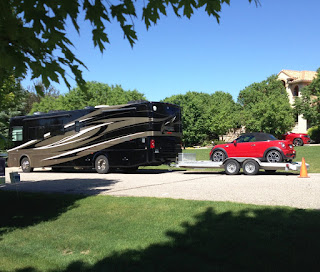 If it is June then yes, it’s time to pack up our things and head to Vegas. If you check past posts for this time of year you will observe how we always make it out to the HPE big-tent marketing event held each year in Las Vegas and the nature of our business is such that attendance becomes mandatory. It’s always good for a fresh story line or two and this year didn’t disappoint. Anyone following my business blogs will be able to attest to that.

But part of the fun about each trip to Las Vegas is the prep that is done beforehand.  There are procedures to be followed, of course, and routines to be completed. Whether it’s stocking up with enough water to sustain us, or simply checking our reservations at Mastro’s Ocean Club, Las Vegas, or just making sure there was air in the tires of the trailer, these routines help getting our heads around what was to come. The faithful big-rig is always a pleasure to drive and as the days and hours wind down to when it is time to pull away from our home we truly look forward to hitting the road.

This year, we had a lot more on our minds than just a casual visit to Vegas. Our home remains on the market but after almost three years, we are starting to think that it’s time to pull from the market and perhaps try again in four or five years’ time. The upside is that we can relax and once again, truly enjoy all our home has to offer and that’s something we haven’t been able to do for these past three years and it has been a bit of a downer in many respects. 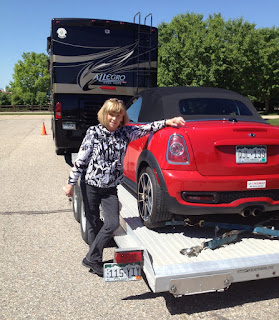 Before pulling away from the curb there’s always the opportunity for that final photo and Margo didn’t disappoint. Throughout the years she has been a constant help during the final hours before departure as we load our car onto the trailer and get set. This year, Margo was paying particular attention to this process as we elected to take her personal Cooper S Roadster by Mini to use in Vegas, but given it is a convertible we weren’t at all sure just how many times we would be riding down the strip with our top off!

Part of the exercise this year involved checking out a particular parking site at the resort we frequently stay at – The Oasis on the strip. While it’s still in the formative stage, we are considering leaving the company command center in Las Vegas for the winter and the spot we wanted, while not available for this trip, would be the next spot to where we were camping. So we could see how we would fare bringing in the big rig and from all that we were able to see, it looks as though we will be choosing wisely.

But as I just wrote, nothing definite quite yet, but it would be good to be able to use the RV during winter and not have to winterize it and put it into storage – it seems such a waste to do something like that with such a second home on wheels. There is much to take into consideration but the winter months see many visitors from the northern states pursuing similar goals and with as many business events as are held each year in Vegas, we should be able to make good use of the RV more or less permanently onsite so close to as many venues as we attend. 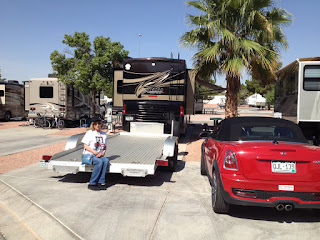 One of the really cool things we have observed in the past happening at The Oasis is the variety of services that can be called upon to do almost anything related to the RV – from washing and waxing the RV to fixing windshields to topping up the propane. But perhaps more importantly, there is a mobile maintenance service on offer so this year, we had a 40,000 mile service performed by one such vendor.

Sure enough, we had the oil changed, a lube job performed, and our various filters all checked – and we didn’t have to take the RV anywhere. Wonderful! But in June, there is no escaping the heat. It was plain hot all the time with a max temperature of 118 degrees F registered at one point. There is no way we would recommend camping in Vegas full time as Colorado provides a much better summer environment although, of late, we have seen many days where the temperature remains in the 90s.

However, whereas a home A/C can keep a residence cool throughout summer, we have come to terms with RVs only being able to drop the temperature inside the RV by 20 degrees so many times, we returned to the RV to find it was a balmy 98 degrees! Wow, some may like it hot, that’s true, and being from Australia (where the western desert lives and breathes you know in 45 degrees, or so the song goes), this is still way, way too hot even by our standards. 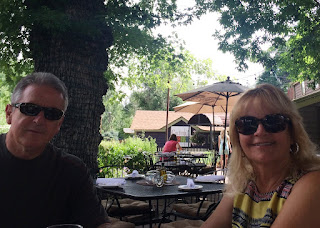 The drive back to Boulder was a “no-stopper” – something we rarely do but a test all the same. How draining would it be to drive the big rig the almost 800 miles back home should the need ever eventuate in the future. Well, it’s possible and with two drivers, not that taxing but all the same, it’s not something we want to do again unless absolutely necessary. Days of 600 miles and even 700 miles have become almost routine for us but that extra 100 miles, particularly in traffic as we encountered coming into Denver, well that is quite a different story.

But we were expecting visitors only a few short days later so we wanted to be prepared. It’s been a long time since we had the pleasure of entertaining the Kennys and we were looking forward to it. To spice up the mix a little we would also be entertaining our niece Asia as well, who was making the trip from Half Moon Bay, California, just to spend time with Anna, Erich and the little ones. For Asia, this was something she had been looking forward to doing and finding herself transitioning jobs (now working for Apple, no less), it seemed like the ideal way to put some separation between jobs before actually starting the new one.

As for the Kennys, Brian and Jan are now very familiar with our home in Niwot and settled in almost immediately. With a couple of trips planned that would take us up into the mountains as well as a couple of nights on the town sampling restaurants both old and new, it came as a welcome break to the hectic pace of the previous weeks. Although, having said that, it wouldn’t be all that long before, yet again, we packed up the RV for a return to the east coast and that would be a 4,000 plus mile trip. Of course, that was in the future so in the interim, it meant a couple of days spent in the comfort of the Maserati! Driving in separate cars gave Brian and Jan the opportunity to take a picture of us - possibly the first time that has been done. 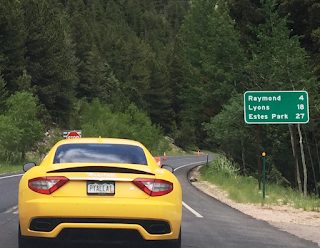 Our drives up into the mountains continue to remind us both that we live this close to the front ranges and the continental divide and they are hard to ignore. While we consider ourselves city folks who do prefer the theater, restaurants and parks that come with city life, there’s not hiding from the fact that here in colorful Colorado, it would be somewhat pathetic if we didn’t take advantage of every opportunity to enjoy the great outdoors. Even if our choice of chariot wasn’t to everyone’s taste. No disrespect to anyone more conservative in nature but there is no substitute for the sound of an open Maserati exhaust echoing off the mountains as we storm around the many turns on offer.

We have often photographed ourselves and our cars in front of this chapel high in the mountains. It’s on the Peak to Peak highway and is tough to miss and like the natural vistas we take in, this too is a thing of beauty and a stop we just have to make whenever we are nearby. When Brian and Jan were here previously it was in their Aston Martin and to see their Aston with our Viper, alongside this church, proved to be quite the showstopper. If you missed the pictures, check out the post of May 22, 2012, Three weeks to remember ...

Cars are a big reason we get together but of late I suspect it is the food and yes, the martinis. And this weekend didn’t disappoint on either front. As the weekend wound down we returned to perhaps our favorite restaurant in Niwor, Coltera, where we enjoyed a very slow paced brunch Sunday morning before leaving for the airport. Next year, we are all hopeful that we will see a return to our track day experiences but to say life has gotten in the way would be an understatement. However, there will be more to say on this topic next month as our Corvette C5 Z06 left for Curt’s new shop in Wyoming for a major rebuild preparatory to it returning to the track. And yes, Margo too is well on the way to a full recovery following a major rebuild of her own. 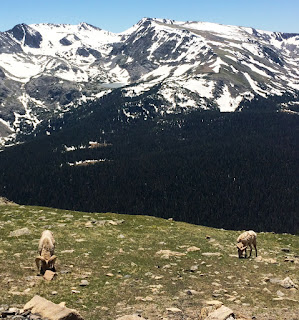 On the occasion of our last drive down from the top of the Continental Divide in Rocky Mountain National Park, just behind Estes Park, we ran across a lot of wildlife. There were elk grazing pretty much everywhere but the sighting of a small group of big horn sheep proved to be the highlight. Rarely do we sight these animals and when we do, they are a long way away but on this trip, they were right beside us and completely oblivious to all the ohhing and ahhing of passersby! And even as it was June, there was still plenty of snow across the divide.

But the temporary cooling at the top of the mountain didn’t last too long – returning to Niwot we sweltered once again as the thermometer continued its steady upward climb into the high 90s. It stayed high for the remainder of the month and made the packing of the RV a task we left for early evening and after the sun had set. I am still amazed at just how much food Margo was able to pack into the RV refrigerator but I know that it will not be enough. There will be times where we will need to stop by restaurants during this upcoming trip, but that of itself isn’t necessarily a bad thing.
We often talk openly about where next we might live should our house ever sell. Its cause for quite a lot of discussion and what we can definitely rule out is any return to Australia or Poland. We are just too committed to America now that any such undertaking would be close to ruinous for us both – we have just too much family and too much stuff. On the other hand, the most meaningful upside to staying nearby can be quickly recognized just by the photo below. Yes, the twins continue to grow and there’s rarely an opportunity Margo will pass up to be with them. And granddaughter Ella doesn’t miss any opportunity to make a splash! But as it stands, I suspect we will still be in our Niwot home for many more posts to come but until then, we will suffer as will everyone else here in Niwot as the heat continues. Yes, it’s still too darn hot! Posted by Richard at 5:04 AM No comments: