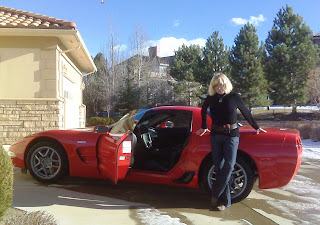 We have been in Boulder, Colorado for almost three weeks and first thing tomorrow morning, we will head back to Southern California. The picture above is of Margo alongside the other ‘Vette – the C5 Z06 that is our “other car” when in Colorado – but no longer playing the part of an “umbrella girl”, having swapped the T Shirt in favor of something much warmer!

For some time we have been contemplating driving the Z06 back to Southern California, and taking it to the track for ’09. We had been reconsidering whether to continue our driver education in the C6 Z51 ‘Vette, or to try the Z06, as the Z06 chassis is pretty good and the 6-speed manual affords a lot more control over power delivery to the rear wheels. All we would need to do is to replace the tires (still the original tires from 2003), upgrade the brake pads and swap out the brake fluids for something with higher temperature tolerances. Could be the way to go!

From our first outing, under the tutelage of the National Auto Sport Association (NASA) High Performance Driver Education (HDPE) program, we were “hooked” and even with the crazy business schedules that we both maintained, we found time to participate in five weekend events in 2008. Starting as raw rookies, with no previous track experience whatsoever, we found the HPDE track sessions really helped develop our driving skills.

Looking back to that first outing at Willow Springs, it was all about learning how to remain informed while out on the track and about communicating with the other students. Everyone wanted to go fast – after all, as we were often reminded, all participants in each session were going in the same direction, there were no speed limits, and we were all out to have fun! But still, there was a need to be safe and to be aware of what was going on around us. We quickly learnt that going fast meant coming to terms with the track, understanding the mechanics of cornering, and working as hard as we could to eliminate errors. And for “newbies” like us, this proved difficult as so much was going on with inputs arriving rapidly from many sources.

If the first weekend at Willow Springs was about communication, the following weekend at Buttonwillow was all about the pursuit of smooth lines. For the weekend, all sessions were run counter-clockwise. But developing a smooth approach, whether changing direction or accelerating / braking, that is consistent and can be repeated lap after lap, leads to faster laps and we both saw our track skills show their first signs of improvement. We also came to terms with corners where maintaining the correct racing line just had to be sacrificed so that the car would be in the right place on the track to capitalize on a following straight.

Our return to Willow Springs a month later gave us the opportunity to look for “cues” around the track to further help us with braking and turn-in. Some of them were tiny and demanded precision on our part. And we really came to rely on our peripheral vision. But we also learnt two other important lessons – at any track, the way to improve was to do so gradually and with small, manageable adjustments. And we learnt how important the brakes were – the only car control that, on most cars, affects all four wheels.

Early in the morning sessions, we were hitting 75 mph and couldn’t see anyway to lift our speeds to 90 mph or even 100 mph. No way! But by increasing our speed slowly and in small 3 to 5 mph increments while keeping in our comfort zone, we were able to realize much higher speeds by the end of the day’s last sessions. And as we drove home after that third weekend of track sessions, we shared a huge sense of accomplishment knowing that we were making progress.

NASA’s HPDE program has four levels – an intro level for novices that is aimed at drivers new to the track and unfamiliar with the demands the track will make; a beginners level for those with some prior track experience and no longer needing an instructor but still working on being smooth and predictable; an intermediate level where passing opportunities become a lot more are generous; and finally an advanced level where passing is allowed everywhere on the track!. At this advanced level, according to NASA’s web site you will be “now experiencing the joys of doing it right in a safe environment! You can now enjoy high performance driving at its finest.”

But after three weekends, all we could see were many more sessions as novices. There were still many more laps to be completed before either of us could consider moving on up to beginner status! But we were having so much fun it didn’t seem to matter, and we felt comfortable driving among familiar faces some of whom were progressing about as quickly as we were. It was encouraging to watch as a few of these drivers moved on to the beginners group sometimes only after a couple of weekends on the track.

Our first three events spanned the months of May through July and we weren’t to participate again until October. The effects of the economy with the run-up on gas prices led to the cancellation of the August weekend and although NASA eventually put together a one-day event, by the time we heard about it we had already made alternate plans.

With the break in the program, we took another look at the C6 ‘Vette and decided to supercharge the LS2 engine. After the upgrade we had very close to 500 rear-wheel horsepower, with 465+ lb-ft of rear-wheel torque, courtesy of A&A Corvette Performance in Oxnard, California. Check out http://www.aacorvette.com/gallery/thumbnails.php?album=41. And we upgraded the brakes with higher tolerance brake fluids and stronger pads courtesy of HAWK.

For our return engagement starting in October, it was back to Buttonwillow for something completely different. On Saturday all sessions were held run clockwise around the track and on Sunday, counterclockwise. And Buttonwillow is an extremely tough circuit to learn. Unlike Willow Springs 9 corners, Buttonwillow has, depending on who you talk to, more than 30! Frequently, even with our eyes firmly elevated and looking well through approaching corners, we “lost our way” and were unsure of where exactly were we on the track.

But we learnt the very important lesson of working backwards through the corners – looking at the corner’s exit we then began to work out apex’s, turn-in, and breaking points. We also learnt that there’s practically no right way through any corner and that what we were all trying to accomplish was to minimize our time in them. Races were never won in the corners – sometimes lost I have to believe – but on the straights. It was on the return visit to Buttonwillow early in November where this message was really driven home.

“The quickest driver goes as straight as possible (for as long as possible) and never lifts (off the gas)! Pro-drivers are either at, or transitioning to, full throttle / brake (at all times).” The return visit to Buttonwillow saw all sessions run clockwise and my instructor gave me the OK to run as part of Group 2. And of course, as has become the pattern with first-time Group 2 (and even Group 3) participants, I had my first big spin. But I survived and as we drove home, we were already talking about planning weekends in ’09 around NASA events.

I have emphasized some of these points in the previous blog postings related to each event. But none of this would have happened without a lot of help and encouragement along the way. And I would like to recognize the many friends and business colleagues who have helped out.

Our colleague Chris had first raised the topic after he told us about his own adventures on the track in his Porsche 911 Turbo. But it was over a lengthy lunch with another business friend Hal, where we learnt about NASA and of the “novice-friendly” approach they provided. Chris and Hal have both continued to provide moral support, as has Simon who works with me here at GoldenGate and races a Miata. Robert, too, who has had the opportunity to teach racers as well, has been always quick to provide insight and advice each time I asked him.

But special thanks need to go to the instructors – John, Fulton, and Tom. They all provided the leadership, and Tom was in the car with us for most of the weekends and without Tom, I am not sure we would have made it through all five weekends. We are glad John provided us with links to film he had made of sessions at the tracks – and viewing the film really helped us both. It has also been John who has helped provide me with critiques of many of these blog postings and for that, I am very appreciative as well.

Hal, and Andy of A&A Corvette Performance, continue to provide us with technical assistance and have been of enormous help to us both. Andy has put in many hours of programming effort – much of it going well beyond what I had expected as part of the supercharging upgrade and for that, we are extremely grateful. And Hal has been quick to educate us whenever we have emailed him with a question – we look forward to watching Hal race in ’09, and wish him all the best in the American Iron series.

What’s next for the C6 ‘Vette? We have talked about a number of things – do we change the wheels and tires and upgrade to something a lot wider? Surely, more rubber to the ground will help getting the power down and improve traction! Do we change body panels to accommodate these changes? Do we upgrade the brakes – swapping out the current rotors and calipers and go with bigger six-piston calipers on the front? Surely, beefier brakes can only help! What about safety? After the big spin at Buttonwillow should we add a harness bar and upgrade to a six-point harness and throw in a racing seat?

I have always enjoyed modifying vehicles – the “cruiser” motorcycles we ride in Boulder have been substantially modified. But I now have reservations about doing anything more to the ‘Vette until we get deep into the ’09 program. We have still many outings to go before we can say we have the C6 sorted out. And with cars, it’s making small, measurable changes that are important – changing everything all at once is probably not a smart move. We were told, tactfully, that it would be pretty stupid. Perhaps taking the smaller, lighter Z06 could be the best option after all.

It’s now New Years day and we are to drive back to Simi Valley. But the weather forecast for our trip through the Rockies has been anything but promising. Oh well! So much for the plans for the Z06. We will wrap the Z06 in its dust cover, and leave it in the garage – it will be a return trip in the SUV again. I had really been looking forward to taking the Z06 on the long drive to the coast.


When 2010 rolls around, we may again consider taking the Z06 to California. For this coming year however, it will be a full calendar of events for the C6 Supercharged LS2 ‘Vette. It may not be the perfect car to use for learning and the wheels and tires may require changing anyway, but then again, this is all about the driver and it will be the source of a lot of fun as we head back to the track! Yes, we want to go faster and yes, we enjoy it. But even more importantly, we want to become better drivers and we enjoy the atmosphere and camaraderie of the race track.

See you all at Willow Springs in March …
Posted by Richard at 6:42 PM 1 comment: Links to this post