Winter sunshine – we almost forgot where to find it! 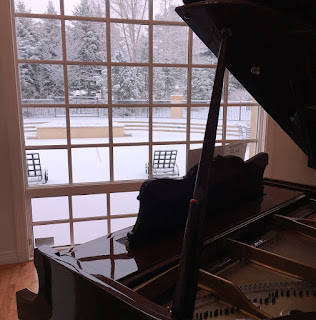 Waking to falling snow isn’t anything to get excited about, unless you are 3 years old or went on a skiing vacation. This year, it hasn’t just been about the snow but the long periods of sub-freezing temperatures we have had to endure. Looking out the back window at the pool and spa and knowing several more months had to pass before we could consider returning it to use was somewhat depressing. Wouldn’t it be nice to experience warmer weather again! But then again, making a home for ourselves in the village of Niwot wasn’t accidental and having the opportunity to truly experience all four seasons went a long way to ease the angst we felt as the mercury failed to climb beyond freezing.


Perhaps it is the weekly routine of taking the garbage bins down the drive to ready them for collection very early the following morning. Or perhaps it is the daily routine of going to the local gym and trying hard not to slip on the pavement as we cross the car park. Maybe too it is the gloomy atmosphere that accompanies the predawn that we experience going about these routines, but no matter, winter is just one season and while for others it’s the highlight of the calendar, enjoying a few days in the sun would be nice, surely!

Margo and I do not ski. We may have enjoyed a couple of outings on the slopes but that was so long ago. It’s just not our thing. Having anything other than pavement under our tires too is something we care little about so putting snow days behind us brings a little light relief into our days. Did I say roadtrip? Turns out that I needed to renew my Australian passport and the process changed a few years ago. In the past, I simply filled in a form, took a couple of photos, threw into an envelope along with the expired passport and a week or so later, a new Australian passport would show up in the mail. 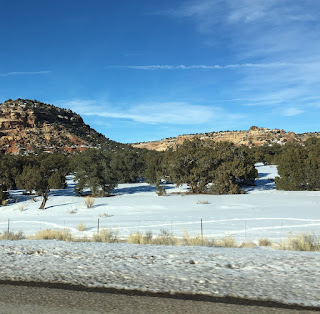 But no longer; you can fill in the form but you now have to make an appointment with an Australian consulate and be interviewed. Having a choice of locations including Washington D.C., Chicago and Los Angeles, well, we chose Los Angeles, of course. The date available for the interview was January 30 and given that it would be Margo’s birthday around that time and being a whole lot warmer that Niwot, the decision to drive to Southern California wasn’t a hard choice to make. As for the choice of vehicle at this time of year, it’s a no-brainer, so with new tires on the Jeep SRT it was just a quick pack of the SUV and we were off. 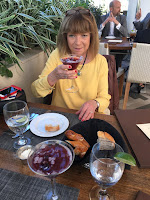 We were combining the trip to the Australian consulate with a business meeting with HPE and that too was something we looked forward to as the folks we deal with at HPE are really good people to be around. And so much at HPE was changing, so it was always good to hear things first hand. We now have a healthy collection of clients who are always interested in our opinions so in some respect, the opportunity to catch up with HPE made the trip even more worthwhile. And did I mention that it’s so much nicer to go to restaurants where you can sit outside and enjoy dining al fresco under a bright sun?

Our very dear friends, Brian and Jan Kenny, opened their home to us for the short time we were in Southern California. This is not news that should surprise anyone who has been a regular reader of posts to this blog as we have spent numerous days enjoying each other’s company. They have a new home in Simi Valley and it has all the necessities of life – a pool and spa, an outdoor fire pit and yes, a great outdoor kitchen. Shaking martinis while slow grilling boneless pork ribs practically defines any first night we get together and so it was that our first night in Simi Valley was under the stars, apple martinis in hand.

The trip down had been uneventful even as it started out slowly. Leaving early Saturday morning we managed to get caught up in the huge exit out of Denver as skiers from all across the planet headed to fresh powder. It took several hours to cover a little less than five miles but we expected this delay. We broke from the line of traffic for a late breakfast and really, no kidding, we rejoined the line only a few car lengths further back after our 30 minute stop. But in all seriousness, with absolutely clear skies, the fresh snow lying alongside the interstate gave us many opportunities to snap a photo or two.

As for the day of my interview at the Australian consulate it was more a case of minimizing the damage – my application was rejected due to incorrect photos being provided. I had hand-trimmed photos taken by UPS for U.S. passports as the Australian government demanded photos that conformed to metric graduations. Mine didn’t. Not so much the overall size of the photo but rather, the distance between my chin and the crown of my head was off by the smallest of margins. So it was a rush trip to a photo shop the consulate steered us to and new photos were taken and then, via FedEx, we sent pictures back to the consulate. They have them now; they are OK and I should have a new passport shortly. 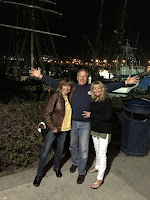 As for the rest of the day it all went smoothly. Lunch, as noted above, was at the Ocean Prime restaurant near to Rodeo Drive. Glorious atmosphere! Wonderful company! And yes, we were able to enjoy one of this restaurant’s signature martinis – Bubbles and Berries! You can still enjoy martinis with lunch just not three of them, naturally. Later that day it was dinner further up the coast, in Ventura, where Brophy Brothers have a seafood eatery that overlooks the docks. And on this occasion, there were a number of tall ships tied up dockside and it proved to be yet another photo opportunity not to be missed.

It is often all too easy to overlook the important things in life. The interruptions of daily routines that life throws our way should never interfere with the essentials – family and friends and for Margo and me, travel and interesting conversations with colleagues and acquaintances. And this trip to Los Angeles was no exception. Yes, it was Margo’s birthday and yes, we were in the middle of three perfect sunny and warm days on the west coast (the rain that has been drenching a parched California simply let up for the time we spent in Los Angeles), so putting work to one side for just a day and enjoying all that the coastline of Malibu could provide came as a real welcomed relief from the chilly days in Boulder. It started with a leisurely lunch at Dukes of Malibu. A little seafood, a little wine and a pair of sea otters entertaining us as they fed on crustaceans! 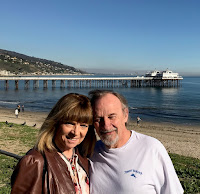 It wasn’t all that long ago that we lived in Simi Valley. At the time it was a very stressful existence as we struggled to make the adjustment to a routine that had us commuting between residences in Boulder and Simi Valley. After many enjoyable years at Tandem Computers, followed by a hectic period at the tech start-up Insession Inc., followed by a lot of fun time working within the Insession Technologies business unit of ACI, the transition to life in Simi Valley at yet another small software company emotionally drained us both. However, you couldn’t really stay stressed for too long when you could grab a set of car keys and drive the Pacific Coast Highway.

Margo and I often talk about it but one way we eased many of those stressful days was to simply go out and buy a car and in the short time we lived in Simi Valley we bought a Pontiac Solstice, a Dodge Viper, an Infiniti G37S coupe and a Nissan GT-R. We have covered many miles in all of them even as we took several of them out onto the circuits we liked to drive from Buttonwillow to Sonoma to Big Willow. Driving proved to be where we let the stresses of the week drain away from us so returning to Malibu and reliving the fun times we enjoyed so much set the tone for one of the best birthdays Margo has had in quite a few years. 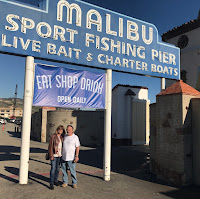 As stressful as those times proved to be, we developed a deep friendship with the Kennys. First meeting them at the Wood Ranch Starbucks in 2008, we have subsequently traveled the world together. From Germany’s Nürburgring to Australia’s Eastern Creek (Sydney Motorsports Park), we have found time to sample some of the world’s great racing circuits together. And it was the Kennys who not only opened their home to us for the duration but organized Margo’s birthday experience. In short order, lunch at Dukes was followed by a stroll along the Malibu Pier, coffee at Starbucks before it became time to watch the sun setting behind the Pacific Ocean.

From magazines to reality television, readers will more than likely know of Nobu – a Japanese restaurant with a reputation for fine dining. However, it wasn’t to dine that brought us to Nobu but rather the opportunity to sip an early evening drink before heading to our final destination of the day where we would enjoy dinner. With the strict anti-smoking regulations now in place, Nobu had set aside a number of outside seating nooks with marvelous views of the Pacific Ocean but they were almost deserted as there are now less and less smokers in Malibu. So we sate and sipped white wine and champagne as the day began to wind down. Glorious! 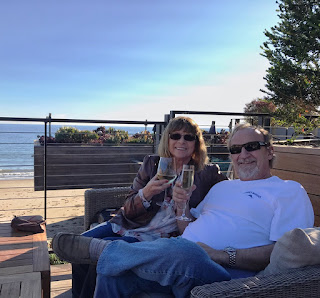 The day ended at the recently-opened Malibu Mastro’s Ocean Club restaurant. When the stress of Simi Valley began to peak in the late 2000s, Margo and I would find our way to Mastro’s in Thousand Oaks. Perhaps as many as three times a week and we continue to enjoy dining at Mastro’s restaurants whether it is at their Las Vegas, Palm Desert, or Scottsdale locations so to be able to sit at tables alongside the Pacific Ocean to glimpse the last of the sun’s rays as nightfall descended, was a great way to celebrate more formally Margo’s birthday. Did I say perfect? Well, exactly!

Whether it was the cloudless days or the smell of salt air or the taste of seafood and great steaks, it’s hard to say. Perhaps it was the sum of everything we enjoyed while back on the coast. Then again, maybe it was just the time spent with very good friends that made the time as enjoyable as it turned out to be – the Australian government bureaucracy notwithstanding. Now, back in Boulder amid much colder winter weather those sunny couple of days in southern California is just a memory but then, that what makes life so enjoyable. Unexpected pleasures? Oh yes, for sure, and something we most definitely will not be forgetting any time soon! 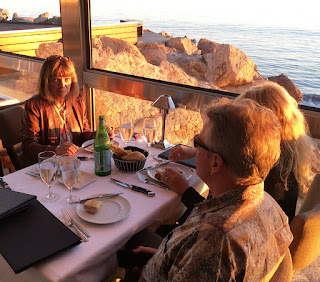 Posted by Richard at 2:52 PM No comments: Links to this post