Has the time come to slow down? Nah! 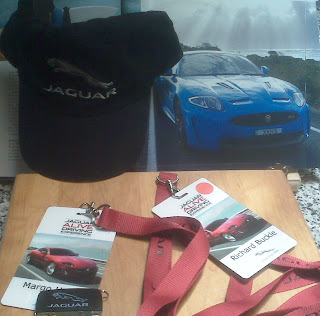 What began several months ago as a possible side-excursion in Las Vegas, while we waited for a Computer trade show to start, took on a life of its own in the lead-up to the event. We had been considering renting a couple of modern-era supercars from “Exotics Racing – the ultimate driving experience”. The more we looked through their garage of cars, and before we finalized the deal (Margo had already decided on the Aston Martin V8 Vantage and the Porsche 997 Turbo S while I had gone down a different route choosing instead the close relatives, the Audi R8 V10 and the Lamborghini Gallardo), the more we thought that this might also appeal to our good friends from Simi Valley, California, Brian and Jan.

However, during the time that they visited us, to help us come to terms with our new RV, they purchased an Aston Martin of their own. In the post of May 22, 2012, “Three weeks to remember ...” I developed a story line around this momentous occasion, including how over the course of the weekend we spent time in their Aston as well as in our Viper before returning a week or so later in our Nissan GT-R. But in the closing remarks of that May post, I may have tipped my hand about what was to come as I wrote of how even though the Aston Martin is such a thing of beauty, perhaps replacing one of the Corvettes with something else may not be an unreasonable consideration. An Aston? A Maserati? A Lamborghini? Something else?

Coming completely out of the blue, so as to speak, Margo received an invitation from Jaguar to join them for “Jaguar Alive Driving Experience” being held in the Bronco’s Stadium parking lot and it was an offer she immediately accepted. I was registered as Margo’s guest and as much as Margo and I preferred cars of other manufacturers, we were only too happy to give the Jaguar a chance. After all, there was a certain serendipity to being back looking at Jaguars as it was ten years ago that we walked from the Jaguar showroom floor, our checkbooks still firmly in our back pocket, after an over enthusiastic Jaguar salesman showed us the latest addition to the dealerships portfolio – Aston Martin! The picture above is just a small sample of the handouts Jaguar provided on the day. 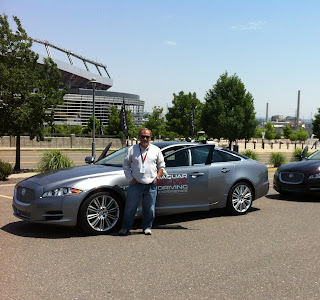 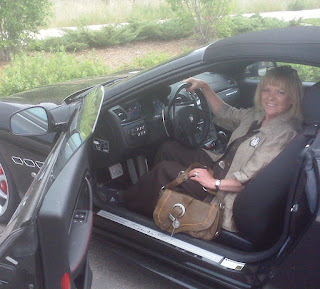 As much as we tried to be enthusiastic about Jaguars, we just couldn’t do it – nice cars and definitely vehicles to stir the souls. But not this weekend! Just a tad too sedate for us but perhaps, in a couple of years time? It would only take five days, however, before I was back at Sil Terhar, talking with Steve , our salesman to explore whether they truly would let us test a couple of their more exotic cars. At the time Brian and Jan bought their Aston Martin, Jack TerHar had told us of the dealership’s decision to not only add Lamborghini to their franchise but Maserati as well. Sure enough, walking onto the lot that fateful Friday, a couple of examples from Maserati were on display and for a brief moment, I had the real pleasure of driving a wonderful example from their latest line in coupes – a convertible Maserati GT – S.

It only took a short spell behind the wheel, pulling the paddle shifter just to hear the rasp of its exhaust, before I was hooked.  Catching up with Margo we decided to return to Sil TerHar first thing so Margo could experience the convertible – after all, from the time Margo had seen an early iteration of this coupe in 2009, this had become her dream car. As we drove to the dealership, we both felt that this would be it, and unlike Brian and Jan, we did bring our check book along with us for the ride. Steve suggested that to better experience the convertible we spend most of the day behind the wheel. “Take it up into the mountains, experience all it can do, and when you are ready, bring it back and let’s talk!” Settling in for her first real drive of a Maserati, Margo was all smiles as the picture above so clearly depicts.

It was only a week or so earlier that we had been driving Jaguars around a football stadium outside Denver, and before that, behind the wheel of an Aston Martin as we drove the northern portion of the famous “peak-to-peak” highway leading to Estes Park. But here we were behind the wheel of a Maserati taking the same route up to the peak-to-peak highway only to head this time south to Golden. Seventy to eighty miles of some of the best scenery in all of Colorado and we were in an open top Maserati with an exhaust that opened up every time we rolled onto the gas. The picture above is of Margo alighting from the convertible, roof firmly in place, as we came to a stop in Golden. We certainly needed a cup of coffee! 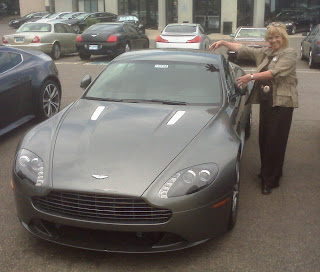 Unfortunately, the drive back to Steve left us with mixed emotions. This, after all, was the first drive by Margo of what for the past couple of years she had told family and friends was her dream car. However, after having spent the time we had in the Jaguars, the finish in the Maserati was anything but classy – the majority of the material used in the cockpit was plastic. In a $150,000 Italian luxury car? You have to be kidding. The thing was that when I expressed this sentiment to Jack TerHar, even as Margo was having a quiet talk to Steve, he didn’t miss a beat. “You’re so right,” he said, “while these cars hold a certain appeal they are still mass produced coming off a production line and the use of leather, for instance, is down to just two hides! How would anyone perceive that as being luxurious?”

Fortunately, there was still enough light in the day to keep trying new cars. The scorecard to date? A Viper, an Aston Martin 8 Vantage, the legendary Nissan GT-R, the extremely rare Jaguar XKR-S and now the Maserati GT-S convertible! So when Jack suggested that we don’t leave before taking a test ride in a brand new Aston Martin V8 Vantage S we consented and had him pull one into the driveway. First impressions continue to influence Margo and me immensely, and no sooner had we seen the car being prepped for us, we knew that this would be something completely different. Without giving me a second look Margo jumped right in, taking the driver’s seat.

There’s something beguiling about the prospect of love at first sight but one look at Margo and it was unmistakable. It only took a short drive and a brief encounter with a series of sharp turns leading through a back way to the Boulder Turnpike, and Margo was hooked. We did little else but run the car for four or five miles before heading back to Steve and Jack. As the picture above so clearly depicts, after all the cars we had driven, this was it! Margo knew really what she wanted but as we began to negotiate with Steve, in those very last seconds, we backed away. The checkbook was going to stay in my pocket and with a huge sense of loss, sucking in deep breaths even as we sat in the showroom, the timing just wasn’t right. We would have to put off the decision until we had a more realistic view of what really were our priorities. We were definitely no ready to give up our Nissan GT-R, not even on Aston Martin. But that’s another story to be told later. 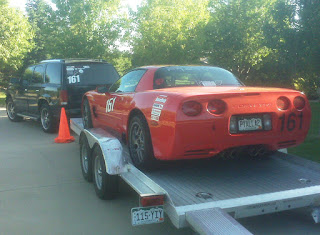 The days that followed saw us once again immersed in business but all the same, work was being done on our track car – our 2003 C5 Z06. Coming back from Willow Springs, we knew that with the increased speeds we were carrying it was probably a good time to upgrade the brakes and to improve on our safety. Now the Z06 has a harness bar with six point harnesses for both driver and passenger, and the rotors and pads have been replaced with new, thicker premium rotors from NAPA and HP+ pads from Hawk. Courtesy of our good friends at nearby Corvette Spa. Remarkably, after outings with National Auto Sports Association (NASA) at Pikes Peak and Willow Springs as well as  a couple of lengthy open “lapping days” at High Plains Raceway (HPR) the tires looked remarkably healthy and continued to surprise us with the grip they provided – for tires with a treadware of 380!

Friday we were again participating in an open lapping day at HPR. It was supposed to be one more opportunity to experience track life from the air-conditioned comfort of our new track-side command center, the Allegro Open Road RV. However, the late arrival of a component needed to complete a routine service meant that we wouldn’t have it back in time so we would just have to suck it in and take the 105+ temperatures as best as we could. Margo took the morning sessions while I was to swelter under the onslaught of the afternoon sun – it was miserable for both of us. The Vette never missed a beat, although late in the day when I started selecting second gear for more aggressive corner exits, the transmission temperatures did begin to climb excessively so we ended the day before my fourth session.

The picture above is of the Vette on its trailer behind the venerable and much-abused Escalade “tow vehicle” just after we returned home. It would be the next before I completed the unloading as I was completely spent. Even as we both tried to stay hydrated through the day, it sapped every bit of energy that we had. With all the cars that we had driven over the course of the month, it was our oldest car, the Vette pictured here, that ultimately gave us the most fun and to be hanging out with other drivers even younger than our children well, as the commercial so succinctly sums it up, priceless!

The C5 Corvette Z06 is now firmly entrenched as our weekend fun “day-at-the-track” car and, looking back on our adventures of the past four years, life could have been so much easier if we had of made the switch earlier. Well, what do you know! However, when it comes to quieter, more leisurely driving, the Aston Martin sits firmly atop Margo’s list of dream cars so somehow, someway, I am sure one will find its way into the garage – it’s just that it will not be any time soon. As for slowing down, then yes, we need to play more golf …

Posted by Richard at 8:41 AM No comments: Links to this post