Travel took us down different paths – but can you take a supercar on a roadtrip? 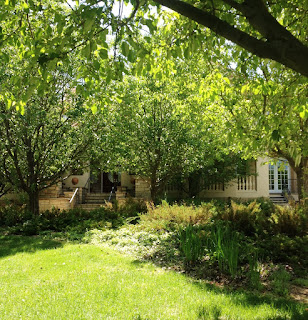 There is no hiding from the beauty of spring. At this time of the year, with summer fast approaching, the richness of the colors that adorn every bush and tree remind you of why you elect to live in a place that has seasons. Boulder, Colorado, delivers once again! More noticeable this year has been the growth that has occurred – the once highly-visible entrance to our home can now be only glimpsed through trees that have grown as tall as the roof line.

We have had our home on the market for three years and while there were a number of viewings with the occasional expression of interest, including one offer that was subject to so many contingencies that it was more or less a wish rather than a reality, nothing has materialized. With red hot housing markets all around us, it has us wondering what did we do that was so wrong.

The village of Niwot is much loved and the estate homes for sale all showcase with considerable glamor but for them too, no takers! Then again, being given a second chance to live in an area we have grown to love so much cannot be considered a consolation prize. That long “honey-do” list of tasks we have put off for so long may actually become our true “to do list” that we finally get around to addressing after all. Windows do need cleaning, leaves do need raking and yes, a number of those bushes and trees we have admired for so long need to be trimmed. 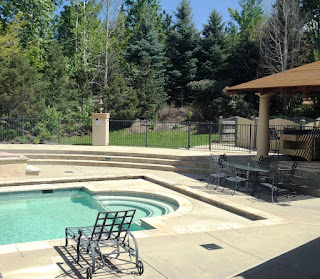 With the onset of spring, it was time to pull back the covers and get the pool and spa up and running. In addition to the “to do” list already mentioned, we have in mind the addition of a fire pit, naturally. Now in vogue, it seems reasonable to us that one should be installed. Having only been introduced to s’mores relatively late in life, Margo is now found of the ritual even if her patience is sorely tested at times. There are plenty of options these days when it comes to installing stand-alone fire pits but having the option to throw real logs into a pit on a late fall evening certainly sounds enticing.

We used the spa a number of times last year and thoroughly enjoyed it. This may sound unusual but over the past decade – pretty much since 2005 – we haven’t been home often enough to take the time to leisurely stroll the few yards to where the spa bubbles ever so enticingly. However, with a far more domicile period the opportunities to relax in the spa, a chardonnay in hand will likely prove too much to resist. The fact that the back yard with its outdoor kitchen, pool and spa all return to pristine condition so quickly with the changes of season never ceases to surprise me and like all those bushes and trees, is yet one more reminder of why Margo and I live where we do! 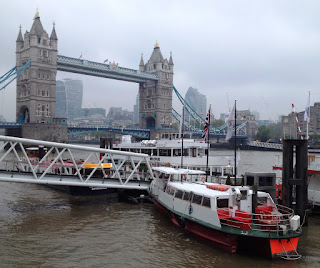 The month of May wasn’t without more than its fair share of travels. My re-engagement with Regional User Groups made up of users and vendors from the HPE NonStop community has led to me making numerous presentations on behalf of one of my clients, OmniPayments, Inc. Earlier this year it was simply a visit to a nearby city such as Scottsdale or Anaheim. However, as OmniPayments CEO, Yash, found himself becoming more involved in major customer projects, I was asked to help out further afield.

A quick trip to London even on short notice was an opportunity I had few excuses that would fly. So leave Denver on the Monday and be back by diner on Friday seemed entirely doable – so it came about. The gathering of the British Isles NonStop community took place in the financial district better known across the globe as “the city.” Being in London I thought it would be opportune to drop by the offices of HPE and pay my respects to the local executives but even though I had worked in this part of London for almost a year back in the mid-1970s, it had become unrecognizable and I was soon very lost.

The good news was that I was able to find my way back to my hotel which was adjacent to London’s famous Tower Bridge and each evening I took advantage of the hotel’s location to try out a different restaurant flanking the Thames River, east of the bridge. And it never failed to be entertaining although getting one bar to provide me with a martini proved a little exasperating. Nevertheless, with the skies clouding over, the picture of this part of London any of these restaurants provided was priceless and I was only more despondent that time had prevented being able to make the arrangements for Margo to have joined me. 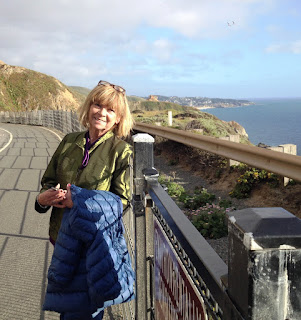 What made up for not having Margo with me was quickly rectified as we had the chance to drive to Palo Alto for a HPE NonStop sponsored gathering of vendors. We elected to take the Maserati on this particular journey and it proved to be a reliable beast and one that enjoyed the longs days on the highway. It’s rare to see a Maserati being driven as a grand tourer and yet, this is what it was designed to do – the engine merely ticking over as the car was given ample opportunity to stretch its legs, so to say.

The Maserati shares its engine with the previous model Ferrari California. It’s a 4.7 liter, twin overhead naturally aspirated V8 that shares much of the bottom-end with its Ferrari sibling with just a different exhaust manifold and engine mapping that Maserati considered better-suited to a grand tourer. And what an exhaust they finished up with – Maserati now owes much of its success to date in the US to that exhaust note and every chance we had, we switched the mode to sports and let the exhaust pipes open up! Each day, the miles simply vanished and we wound up exiting the Maserati at our next hotel stop very much as fresh as when we had first sat in the car earlier in the day.

Fortunately, Margo’s niece at Half Moon Bay invited us to spend several nights in her home close by the hotel and golf course that makes up the Ritz Carlton resort at Half Moon Bay. We cannot thank Joanna and Jens enough for their hospitality and indeed generosity and on the final afternoon, we all headed past Devils Slide on highway one to dine by the water at a fine Peruvian restaurant. With business taking us back into San Francisco and the Memorial long weekend beckoning, it would have been unnatural not to drive the Maserati back up the old coast highway one just one more time and the weather, oftentimes very foggy, cleared up entirely and allowed us to enjoy one of the more scenic outings along a stretch of California’s coastline we have done so many times before. 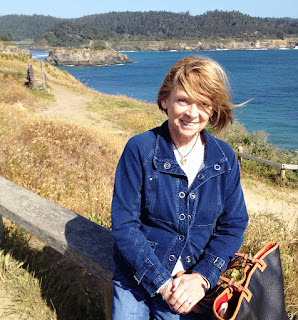 Any opportunity to stop at Mendocino is not something we ignore so that afternoon we parked the car, walked the streets, exploring many of the art shops, before walking out to the end of a point protruding deep into the bay. Given the sunshine, the view was spectacular and one we are both sure we hadn’t enjoyed previously. We overnighted in a motel just a few miles from Mendocino perhaps more correctly identified as being on the outskirts of Fort Bragg, where the next leg of our trip would start and that would include roads not previously travelled.

California highway 20 is a delight. It takes you twenty or thirty miles through mountainous costal ridges heavily forested with sequoias and where the road provides as many tight twists and turns as you would encounter on a short road course for track cars. Delightful! In general terms, runs west to east from the coast all the way into Sacramento with portions of its length shared with highway 101 as well as interstate 5. For a considerable time, after exiting highway 101 back onto highway 20 proper, you skirt the northern shores of Clear Lake where you pass through towns such as Nice and Lucerne and where the local architecture takes on a distinctively European look.

California highway 20 also takes you right on to US highway 50 that passes through Lake Tahoe where we had lunch on the southern shore right by the lake. However, immediately after lunch we committed ourselves to driving the rest of the way on highway 50, the loneliest highway in America and one we had driven before but in the RV. In stark contrast to the early miles of highway 20, nevertheless it is a road everyone needs to drive as it’s not without its own challenges in places. Break down out here and it could be a while before you could flag down someone for assistance! 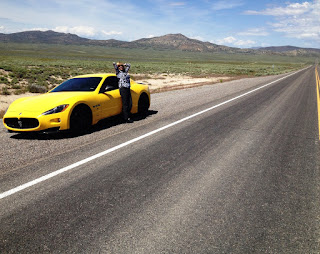 It was only a year ago when we had driven the RV along this same stretch of highway 50 that was covered in the post of August 1, 2015 With places to go and plans in place, the wheels fell off … and the photo above was taken at almost the same place with the same results. Nothing but deserted highway all the way to the horizon! The trip to California and back wasn’t just about the journey this time. It was also a test to see just how entertaining driving the Maserati would be as it’s been a year or so since we last took it on a grand tour.

I am pleased to be able to report that our love affair with this majestic mobile piece of art continues and any thoughts we may have entertained about selling the Maserati after all these years was firmly squashed. We have rarely entertained buying a car that just didn’t look good and against this yardstick, the Maserati scores more highly than anything previously owned and as the payments are getting close to winding down, what on earth would we consider as a replacement when it comes to grand touring?

There was an occasion when we were at Sonoma with Northern California NASA where we saw an almost identical Maserati GTS, in yellow no less, on track running with the HPDE 4 group but that really as an anomaly by our books. The car is fast but not that fast and the extra weight that comes with being a grand tourer must play havoc with the brakes and suspension. We never did get a chance to talk to the driver after a session but no, our Maserati will never see a track. On the other hand, knowing that someone did indeed track their Maserati gives newfound this credibility to the overall value the car provides no matter the challenges.

We miss our time on track even as we miss having to take journeys where we are by ourselves – this was never the plan. Next month, we return to Las Vegas once again for the big tent marketing event put on by HPE where we will be taking the company command center and working from it in 100plus degrees. Can’t wait. However, anything further about this trip will have to wait until next month but in the meantime, there’s the RV to pick up, the trailer to be checked and the Mini Cooper S to be cleaned as yes, for this adventure we plan on checking out having a convertible Mini in Vegas.The fun most definitely now awaits us, so stay tuned and look for the next post!

Posted by Richard at 8:00 PM 2 comments: Links to this post