The colors are on display wherever we travel but shortly, it all will fade to white! 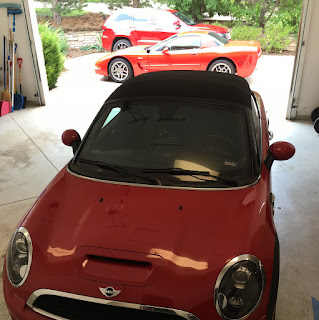 With fall fully under way the leaves continue to pile up around the garages and so there has been numerous times this month where we pulled the cars out so we could sweep the garages clean. This means shuffling the cars around and on one occasion, we had the red ones all lined up and somehow, it seemed to us symbolic. With so many yellow leaves surrounding our home, it was good to add a splash of red! There are numerous maple trees now growing in the yards of surrounding homes and we expect in the years to come, there will be a more dominant presence of red, but for now, with the aspen groves vying for our attention, a little splash of red is a welcome sight.

There is some evidence of snow falling in the high country, but for everyone living along the front ranges it’s been a period of extended balmy weather with the thermometer pushing past 80 degrees a couple of times. Walking around in tee shirts isn’t normal for late October and for the month to end with Halloween being celebrated in the mid-70s, it just didn’t feel as though the seasons were changing. Having dinner outside, under the stars, at our favorite Niwot restaurant seemed routine except when you looked at the calendar. For now, we are enjoying it but the weather pundits are telling us to expect a below-normal winter, with several weeks looking to be spent indoors with the fireplaces roaring.

If you had suggested to Margo and me some time back that we would have a garage mostly populated with red cars, we would have been skeptical. Black cars perhaps, as Margo has always preferred an absence of color and maybe more than one blue car, but red? Not likely! But that’s how it has turned out and the more we consider the future makeup of the garage with what might be inside, the more we have come to realize that change is going to happen less frequently than in the past so we may as well get used to red! 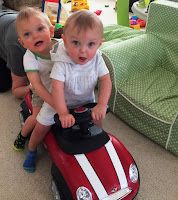 This month saw us take two separate road trips for business. Early in the month it was a week on the road as we participated in events held in Scottsdale, Arizona. Two weeks later, and with an eye on the weather, it was another week on the road as we headed north to Mississauga, Ontario. The city of Mississauga is just outside Toronto, adjacent to Toronto’s main airport, and the home to a number of technology companies, including HPE. It’s not the first time we have taken the three day drive and when combined with the two day drive to Scottsdale, within a three week period we had pretty much traversed the bulk of America. 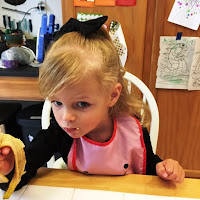 In between trips, Margo spent as much time as she could with the twins – our grandsons continue to grow and have become quite a handful. Help in any fashion is always welcome so when the phone rings Margo more or less knows what’s in stall. But it is a labor of love and although Margo returns home exhausted and looking for a martini, it’s not something she would willingly give up doing but all the same, it’s why we are now grandparents and not parents. We just don’t have the stamina anymore and a quiet home and a place of sanctuary is a blessing.

However, once again, it’s all about red cars. This time, in miniature and with racing stripes! In a message Margo posted only a short time ago, the boys were happily seated atop the toy red Mini we had given to their sister, who is now three and a half years old and attending preschool! No, I couldn’t resist and here is a picture taken by her nanny – getting ready for the formal class picture day.

After some early tentative moves, the boys seem to enjoy any opportunity to be pushed around the house. Margo and I wonder to ourselves the likely impact from such “speed fests” and are preparing ourselves for the time the boys ask for something a little more competitive. Will we see them one day pushing each other hard in matching red go-karts? It’s a long way off but recent experiences has taught us that they may start early in life all of which will only reinforce that yes, we are getting older with each day spent entertaining our grandkids. 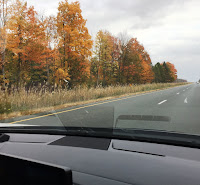 These recent road trips couldn’t have contrasted more with each other if we had planned it weeks in advance. There was still plenty of color along the highway as we traveled through Ontario but there was also a lot more rain showers encountered than on previous trips. We overnighted just outside Indianapolis where the temperature set a local record in the high 70s but by the time we passed through that other London, it was back down to the 50s and wet. Nothing by comparison to what greeted us early morning as we departed Mississauga when the heavens literally opened up on us, but still watching as the traffic on the highway thickened and unfamiliar with local driving protocols, it was an adventure that we are pleased to say we concluded without incident. 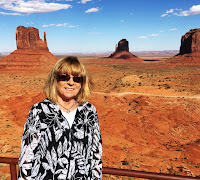 On the other hand, just two weeks earlier, we had crossed the four corners that separate Colorado from Utah, New Mexico and Arizona and then spent hours driving across the desert and Canyonlands famous throughout the world. We skirted the Grand Canyon but on the return trip we did take a side trip through Monument Valley. It’s a scenic wonder not to be missed and finding a couple of hours to spend taking in the sights was a commitment we had made before we had even set foot outside our door at journey’s start.

Whereas the return trip from Ontario was a wet one, we weren’t quite as prepared for what we encountered when we returned from Arizona. We had decided that our return trip would not only take us through Monument Valley but once insider Colorado, we would travel it’s famous “Million Dollar Highway” that took us to Silverton and then down into Ouray. We have traversed these mountain passes several times and in all kinds of conditions but even so, on that first climb up and over into Silverton, we encountered snow at the higher elevations. This made driving a little tricky as yes, we were once again in an unfamiliar car. 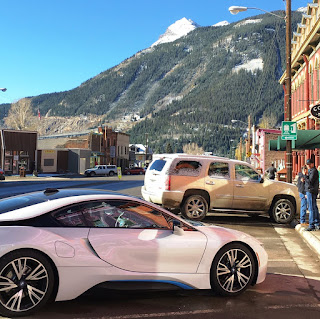 These two road trips this month were memorable for another reason. Just as we had done back in August when we drove to Dallas, Texas, these journeys were our first endeavors relying solely on a hybrid car. If you look at some of the photos used in previous posts you may just be able to catch a glimpse or two of our latest ride – it’s a BMW hybrid i8 that our good salesman David finally worked into a deal we really couldn’t pass up. The car is a superb drivers car with phenomenal mid-range capabilities and when you begin to comprehend that a 2,000 mile return trip to Dallas cost us a little less than $100 on gas (even as we covered a lot of miles very quickly) then yes, the rules have changed. We so love our hybrid. 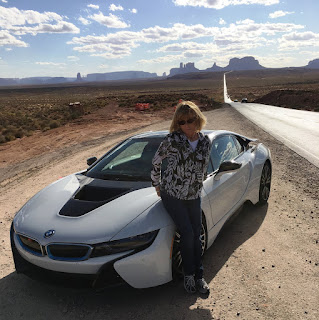 For those who may be interested, after talking to colleagues who owned Prius and Tesla cars and then another colleague who had been an early purchaser of an i8, we ruled out all-electric cars. They simply aren’t for us as we rarely plan our trips well enough to where we could make it (to a charging station) given the range these all electric cars have today. We have enough cars for around town driving and our Mini is terrific in this respect as it’s very miserly when it comes to gas consumption. No, we want that extra engine and the i8 delivers. I keep asking Margo can we take it to the track – just once? I sure would love to see how it goes as no car we have is as accurate at hitting apexes as the i8. 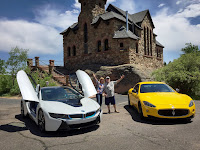 But alas, no – it’s not going anywhere near the track. In some respects, that’s the good news as the Corvette continues to be our track car. But unfortunately, the news wasn’t all that good for the Maserati. After having both cars in the garage for some time we realized that in three months we had driven the Maserati only twice and each time for just a few hours, we decided to sell it and Margo proved rather ruthless once again and the demise of the Maserati was as sudden as it was final. And to think, I had just put new tires on the Maser. 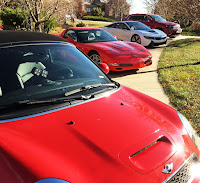 The drive has taken on a distinct look of late. Following yet a further clean-up of the garages we parked them on the driveway for a while and the white of the i8 stands in contrast to the red cars and that’s probably the way it should be. If red cars are traditional cars it just wouldn’t have been right to add a red BMW – and no, they don’t make a red i8 fortunately. But there is a bigger storyline developing here as we continue to work towards selling our Niwot home. Should we ever consider easing our workload, which cars would we end up having in our garage wherever that may end up being?

After our most recent travels one or indeed all of them might be hybrids and already we have been paying close attention to the new BMW X5 with the same eDrive as can be found in the i8. We haven’t driven one yet and it’s only a distinct possibility for much later, but it would be good to experience what a big, heavy, SUV feels like with a similar hybrid package. Could that extend to our track car? Well, not likely …

As for the colors of fall and the many days we have spent under blue skies in such balmy conditions, the team out at High Plains Raceway where we have spent many days on track have introduced a winter package for alternate Saturdays, 11:00am to 4:00pm. Seems like the forecasts are for continued warm weather right up until Christmas so who knows, even as we thought track days were done and finished, we may be able to work in just one day before the year ends. I certainly would like to see Margo and I both on track as the Corvette is most definitely track-ready and it’s been over a year now since our last outing so yes, fingers crossed. We have just had the RV winterized and it’s out of commission now till the spring but we still have the SUV and trailer so maybe, just maybe, an opportunity presents itself.

Well, until that day arrives we still have two more trips back to the west coast to complete before 2016 comes to an end. Halloween is behind us but then there is Thanksgiving and Christmas to celebrate and who knows, our home may have a new owner. And who knows, we may even have witnessed the season’s first snow fall. I won’t be worried either way as after all, readers may recall we were still experiencing snow fall all the way into May this year so perhaps we are catching a break. We will just have to wait and see and perhaps that’s how it’s meant to be – living on colorful Colorado means that it’s not just cars that can be white but the entire mountain front ranges can be every bit as beautiful freshly painted white! 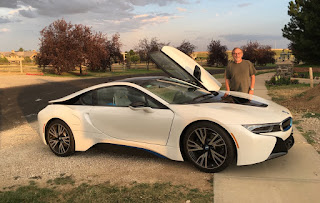 Posted by Richard at 4:20 PM No comments: Links to this post