The miles will add up! 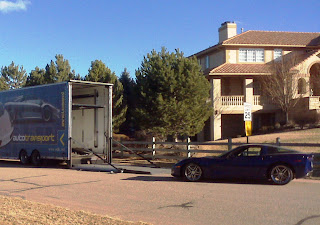 We’re returning to Colorado, and we realize just how much we missed the change of seasons, the view of the mountains from our front porch. Yes, even the periods of snow we are subject to represent moments of tranquility we have really come to miss!

We hope that although this change in location will definitely put a damper on the program we had planned for this year, we will get our C6 Corvette coupe onto tracks for a couple of outings this year. As much as we grew to appreciate Southern California and enjoyed the friendships we formed during our time there, as the saying goes, there’s simply no place like home!

Pictured above is the blue ‘Vette, #116, being unloaded from the trailer that brought it across the continental divide. With winter very much a force to be reckoned with, it was a tad too risky to attempt driving the western interstate system with the ‘Vette set up the way it is – no doubt, its ability to plow through snow is a capability we just don’t want to put to the test.

Last year we managed to participate in events on two continents as well as in two states and the impact that made to our daily routines were considerable. While I have covered in previous posts how we planned on cutting back so as we had time for other endeavors, this move will force additional changes on us and we will be even more selective than we had originally planned.

Distance will now be something we will have to live with, and track weekends will have to be planned around business activities to better capitalize on any absence from our Boulder office.

Perhaps the biggest impact from the move will be on the car itself. For much of last year, we trailered the ‘Vette, happily towing it on a rental from U-Haul and finding the Escalade a willing workhorse. We had run the car on Toyo R888s for most of the season and had upgraded the brakes by installing Hawk HP+ pads that were better suited to track usage than for daily drives – although we had become quite accustomed to the anxious looks from adjacent cars whenever we pulled the car up at traffic lights!

With the last event of 2010 we came away from the track with safety concerns. On the wide open and banked corners we encountered at the Auto Club Speedway, it wasn’t unusual for me to see speeds of 155mph even close to 160 mph on occasion, and while tracking back out as wide as we could, following rounding the turn at the end of the speedway’s main straight, we would often glimpse the wall mere inches away from us. Any mishap at these speeds and as solid as the ‘Vette’s construction is, we couldn’t help wondering what condition either one of us would be should something fail and we wreck against the wall.

For the past couple of weeks we had been pricing the installation of a seat more appropriate to the ‘Vette’s usage as well as a harness bar and five-point harness. We were also pricing the installation of a much bigger brake kit and were close to ordering the Willwood upgrade. We had even been online with TireRack and ordered a set of Hoosier R6s.

However, as the storyline unfolded and the move back to Boulder became definite, we cancelled the tires, put back the brake upgrade, and filed the paperwork on the safety upgrades. Furthermore, we decided to take the ‘Vette down a level so that we could drive it to tracks pretty much anywhere in the western half of the United States.

As for tires, we have now gone for a set of Michelin PS/2s, and for brake pads we have installed the more practical Hawk HPS “high performance street” pads. A little softer than we have run of late, with a lot more brake pedal travel than before, but as a combination, a package we can handle. All our fluids were replaced during our most recent service but we stayed with the same higher quality fluids that we have relied on for the past couple of years.

Over the past couple of seasons, we have developed close ties to Andy, Jessie, James and Steve at A&A Corvette Performance in Oxnard, as well as Charlie and Austin at RPM in Santa Clarita, Dave at North Star Automotive Technology up in Mountain View, and Joe at West Coast Corvette. All of them had invested time in bettering the big ‘Vette’s performance during the past year!

Andy was now looking forward to adding the bigger brakes and Austin was going to overhaul our transmission – strengthening it considerably while changing the final drive ratio. Between Charlie and Andy, there was always the subject of changing out the cam for a more supercharger “friendly” grind. As for Dave, all he wanted to do was something really crazy with the suspension set-up, and was providing me with a number of likely scenarios. However, all may not be lost and contact with those who helped us over the years will be maintained as I have really come to rely on their judgment.

Returning to Boulder will bring me back into contact with Pete Cochetas of nearby Dragon Race Engineering and for anyone who subscribes to ‘Vette magazine they may be familiar with his yellow C6 on the April 2011 cover – a rather dramatic interpretation, adorned with miniature skulls across its formable splitter! Pete helped me out last year when I ran afoul of the emissions testers and had to rework the high-flow catalytic convertors on our ‘Vette.

Pete’s a pretty amicable fellow for someone who doesn’t care for the centrifuge-style superchargers produced by manufacturers like Vortech, who supplied the one Andy installed on our Vette, but he seems gracious enough to take a look, and he will become a likely source of local support should a situation ever develop.

According to Pete "we use them and love them in a drag racing scenario but I just haven’t seen them live up to the reliability required to road race them consistently; however, they do offer a fantastic level of performance for very little investment." Fair enough and to date, we have had issues as readers may recall but none that could be related to the supercharger so I’m keeping my fibers crossed!

If we hadn’t taken the ‘Vette to the track, or thought about changes we could make to boost the ‘Vette’s performance, we may never have ran across any of these folks and that would have been our loss. One of the more impressive aspects of owning Corvettes is the ecosystem of vendors and there is practically nothing we would consider pursuing without there being multiples choices of suppliers to turn to – all anxious to explain the relative merits of their approach versus anyone else. When it comes to high performance cars and their tuning, it is just like a religion …

The National Auto Sports Association (NASA) has been very good to us and has proved to be a great club for beginners. While I haven’t necessarily agreed with everything they have suggested – a big horsepower car like the ‘Vette really cannot be driven by simply being hard on the gas, whenever not being hard on the brakes; treatment of the gas pedal requires careful and judicious exploitation and many situations cannot take a full-on approach and we have seen on several occasions NASA instructors leave the track as they pursue such tactics.

However, we continue to hold the NASA organization in high esteem and enjoy every occasion we have to participate in their events. Having now run in weekend events with their Southern California and Rocky Mountain regions, we will work hard on making sure we can work in at least one event this year.

Speed Ventures has been the other club we have embraced and their philosophy is far removed from what we have experienced at NASA. Picking a group to track with is self-determined, but always subject to peer review. Yes, you join as advanced a group as you want to, but it will be very quickly highlighted if you have stepped way outside your skill level. Even so, Aaron and Dave do such a great job of administering just the right amount of insightful intersession and no driver seems the worse for such “education”.

Fortunately, the programs put on by Speed Ventures takes us to tracks we would otherwise not have the opportunity to savor and it was through Speed Ventures that we participated in an outing at Laguna Seca. It will also be through this organization that we will spend a weekend at the circuit at Spring Mountain, just outside Las Vegas, and home to the Ron Fellows Performance Driving School where new owners of Corvette ZR1 coupes get a couple of days of helpful tuition behind the steering wheels of these awesome vehicles!

This weekend, Speed Ventures will be running a full weekend at the Auto Club Speedway and we will not be present. We will be busily unpacking and moving furniture around, as we settle back into our home, a task I know I will just appreciate so much more than being at the track. Perhaps not, but as we will be heading down to Johannesburg, South Africa it may be as late as April before we once again find ourselves behind the wheel on the track!

Throw in a weekend back at Laguna Seca, as well as at Spring Mountain and then add an outing to High Plains Raceway a little to the east of Denver (with a possible appearance later in the year at either Willow Springs or the Auto Club Speedway), and the “compromised” program for the coming summer doesn’t look as bad as it once did.

Much can be made of how track-ready a showroom Corvette has become and how, for the price, there’s little that can match the pure fun it provides all those who take them onto a track. We consider ourselves to be so fortunate to be counted among those who have enjoyed such an experience and thank all those who have helped us every step of the way.

And to the deep friendships we have developed in that time, we are extremely thankful and appreciate it all! We are sure that overcoming the distance and getting together will be a fun thing to plan!

2011 will be a vastly different program to what we have pursued up until now but ultimately it will still be a lot of fun, and the education we are given well worth all the extra miles we will need to drive!
Posted by Richard at 3:43 PM No comments: