This month it was back to enjoying track sessions at High Plains Raceway (HPR), outside Denver, Colorado. Even though the previous month had provided us with the opportunity to enjoy the delights of the Road Atlanta course, it was behind the wheel of other peoples cars and that never quite cuts it when it comes to really enjoying time on track. Throw in the awful weather Atlanta provided, a bunch of nose-heavy high-output vehicles (for the most part), and while it provided moments of fun, overall it was less than fulfilling.

HPR has become our home track and in many ways it is a lot more fun turning up for the open lapping days than participating in organized events. That’s not to say National Auto Sports Association (NASA) doesn’t do a great job of putting on a full-on track weekend, but rather, where Margo and I are at competence wise, getting the opportunity for essentially unlimited time on track for less than $200 is well worth it. NASA has been very good to us through the years and we continue to check out calendars to see if we can make an event but what’s even more important for us has been the friendships that have developed over time.

While it was Margo and I who introduced our good friends, Brian and Jan, to NASA, our shared enthusiasm for fast times on famous tracks has seen the friendship strengthen over time. It was no surprise then for Brian and Jan to hitch the trailer to their Chevy pick-up and drag their Corvette to Boulder. The differences between our two vehicles are too numerous to chronicle in this post, suffice to say all that they have in common is that they are both red but even in the choice of colors, both are different shades of red. While our C5 Z06 is completely stock, save the fluids and brake pads, our friends’ C6 Coupe is anything but stock, and fully capable of blowing away C6 Z06s that may show up on track. 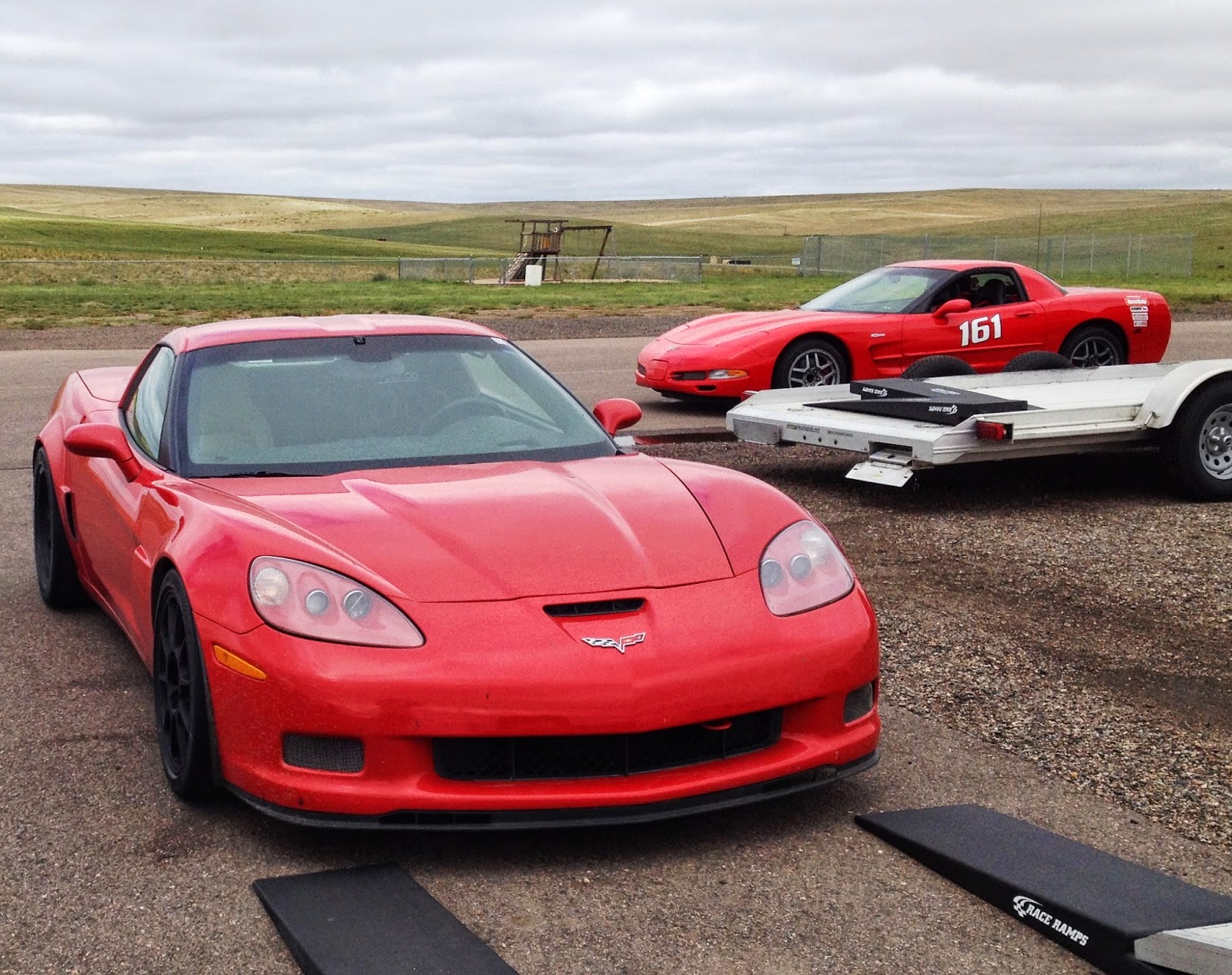 Mid-week there had been rain and at first, our track day didn’t look all that promising. The HPR circuit had been subject to a lot of rain before we arrived, with the last overnight deluge cleaning the surface of the track so much so that it was pretty “green”. While I was running on street tires, Brian was running on full-on racing slicks, so he elected to skip the morning sessions preferring to go on track after a little more rubber had been deposited. With the morning temperature still cool the track was anything but ideal for a fast high-horsepower vehicle.

Fortunately for me, I was able to take Brian along for a ride. As much as Brian isn’t all that comfortable being in the right-hand side seat, it was an opportunity for him to renew his acquaintance with what for him is becoming one of his favorite tracks. It took several laps before my brain warmed up, and along the way I made some pretty weird gear selection choices, but overall, I soon settled into the rhythm that for me is what I like doing on this track. Get the speed just right, tackle turns with just one steering input, and suddenly it becomes a whole lot of fun.

With Brian electing to run the afternoon session he was able to set up his GoPro in our Vette. After all these years I have no video of me on track filmed from inside the car, so I was looking forward to what may transpire. I wasn’t to be disappointed as looking at film is very educational, but I have to admit I was aware of the camera’s presence and for the first couple of laps I was anything but accurate with the placement of the Vette. However, about four laps into the session I began taking advantage of the whole track and stopped pinching some of the faster turns, and this is something I have to work on right from the outset.

The clip included above is about 20 minutes and it shows how empty the circuit can be on open lapping days. As I recall, there was a gathering of Audis with a BMW or two, plus a couple of Porsche 911s, but our two Vettes were the only representatives of the marque and when I was on track with the GoPro, all that I saw was a single BMW and a pair of Audis, one of which was a fully prepped racecarwhich I prudently let by before I began wondering whether or not I could hang with him.. After I decided to give it a try he pitted and I had no other opportunity to see what might have happened.

Afternoon brought Brian on track and what a difference. I went with him for one session and  again I saw the track in a completely different light. With so much mechanical grip, his C6 Coupe eclipsed any time I was looking at by ten or more seconds right off the bat. Oh yeah, and Brian is a far more competent and experienced driver than I am, and one that really does exhibit levels of concentration I can only dream of reaching. For one session we put the GoPro camera back in his car with him laying back behind me to better film my lines and the only reason I’m not including it here was that the film further highlighted just how much more room for improvement there really was (for me)!

Track days – even simple open lapping days as we were enjoying – are still extremely beneficial for drivers looking to develop the “muscle memory” link that is all so important for smooth circulations of the track. I’m closer here, at HPR, than anywhere else but I still have to devote more time. I have now calculated that I have driven more than a thousand laps and yet, I still consider myself to be in the learning phase and it further highlights just how good the professional drivers really are as they race each other. As much of an amateur that I am, however, there’s no getting away from the fact that even with my level of competence, it’s a whole lot of fun to be behind the wheel, going fast, enjoying the time on track where everyone is going in the same direction and there’s no side streets or traffic lights! 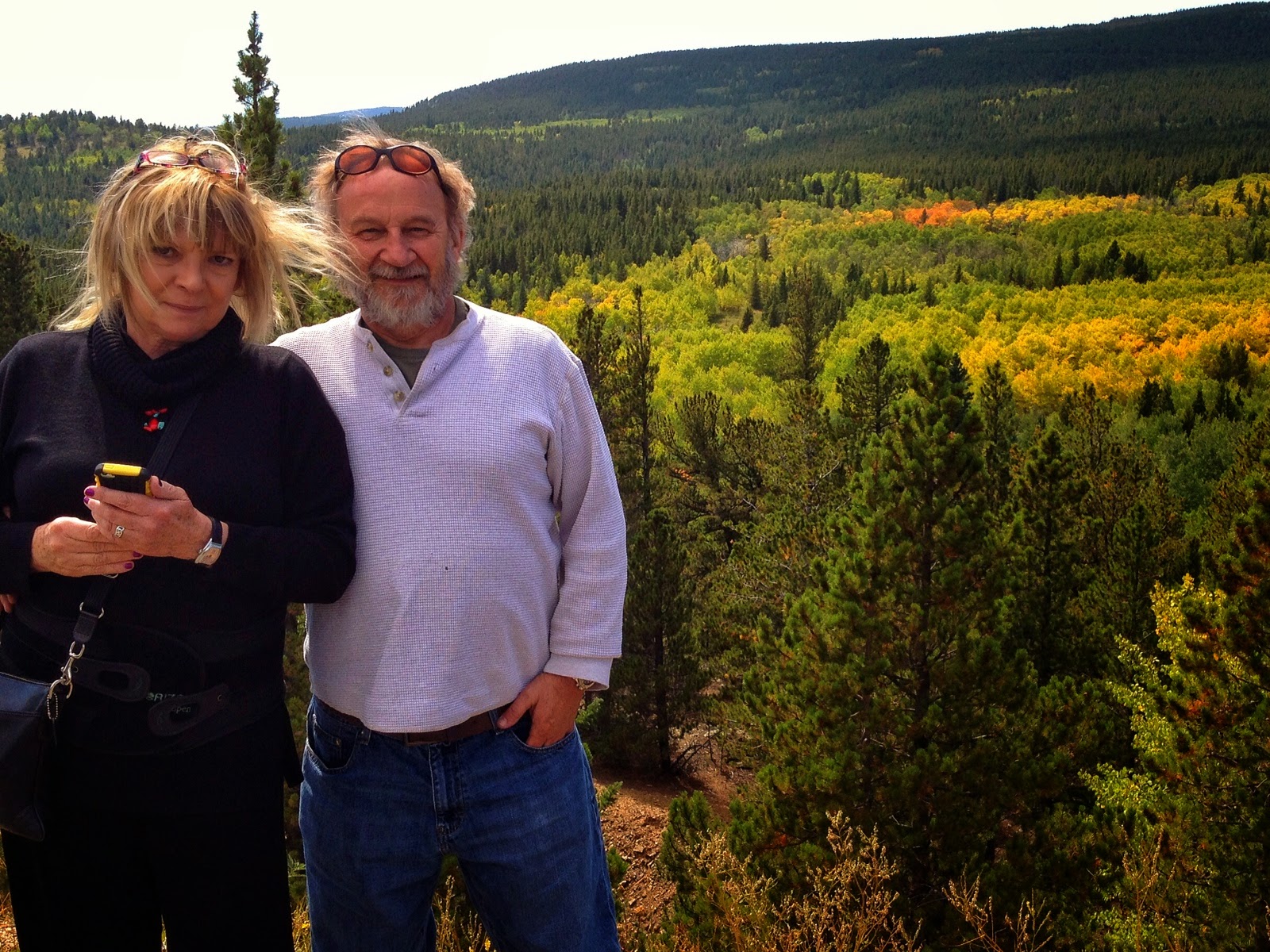 One reason why open lapping days are as enjoyable as they are is that when completed, they leave the weekend wide open. With Brian and Jan in town and fall having just started, it was a great time to become “leaf peepers”! Saturday we took in the sights of Estes Park while Sunday was a driving day as we headed back to Grand Junction. Not only was the wine beginning to flow, but nearby Palisades was the Peach capital of Colorado and something not to be missed. For Margo and me, pictured above, looking down on a forest alongside the Gunnison River as autumn colors began to break through, the reasons for making the trip each year becomes pretty obvious!

It has become a ritual for Margo and me to spend one September weekend on Colorado’s western slopes taking in the scenery and sampling the wares of the region. Readers who check previous posts from Septembers past will recognize the tradition (and the peaches reference), and while we usually elect to make the journey during the Labor Day weekend, this time we were a few weekends later and enjoyed the fact that fewer people were on the roads. Brian and Jan were essentially driving back to Simi Valley, with us along for just the first leg of their trip, but being able to pull into any sight unaffected by other travelers was a new experience so much so that for anyone planning on visiting western Colorado I would strong recommend waiting till after Labor Day.

Our track day had involved using our command center in order to provide Brian and Jan some respite from the otherwise bleak conditions of a dreary prairie outpost. Fortunately, in bringing along the RV we were able to check out all that would be required for a longer excursion planed for late October. Business would likely be taking us back to Nevada but on the return trip, we would have time for another weekend in Zion’s National Park. It has become very easy to attract business colleagues into the command center whenever we use the RV for these purposes and on more than one occasion it has helped us close business. Having said that there’s no escaping just how much Margo and I enjoy the self-contained that comes with having an RV and we plan to continue exploiting it in this manner for many years to come. 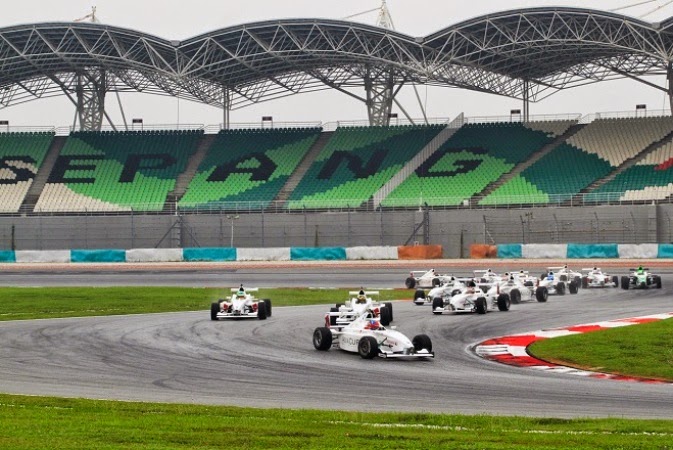 Before completing this post let me mention Brian’s and Jan’s grandson, Colton Herta. This year saw Colton move up one more rung of the ladder that leads to some serious open wheeler seat time whether it be F1 or Indy Racing League. If you talk to Colton, now 14, it’s definitely all about getting a seat in F1 and it’s not out of the question that this will happen at some point. Colton competed in the F2000 series this year with events taking place at the same time and often on the same tracks as the more senior Indy Lights and Indy Car events. Unfortunately, turning 14 the weekend of the very first event in the series meant that he missed the opening round and as the season progressed, it became very clear that his team was giving him a car that was just a tad off the pace.

However, when the opportunity came to race in Malaysia on the same track as F1 cars use, he jumped at the opportunity. As Racer magazine was later to post, “Fourteen-year old Colton Herta had his first two races in the AsiaCup Series races at Sepang, Malaysia, Saturday, collecting first- and second-place finishes. The championship, for Formula BMW cars, is run by Peter Thompson's Meritus.GP organization. This weekend's event is rounds 5-8 of the 12-round series, there are two more races on Sunday.” Unbelievable! Up against experienced drivers who had been already racing for the season and he grabs pole, then a first place and a hard fought second, with the Australian driver, Jake, passing him on the very last turn (and yes, Jake is 20 years old).

Of course the family was very pleased to hear the news even as it kept the Kenny – Buckle household up until the wee hours as we followed updates directly from the track. I have covered Colton in previous posts and watched him progress from Karts to entry-level open wheelers to F2000. Colton even managed to get a seat in a 650 hp Red Bull Global Rallycross GRC Lites car for the X Games in Austin this year – where the games organizers acknowledged that “It’s finally happened: a driver born in the 2000s will take part!” Even as I sit in our Vette, with time on my hands these days even as I continue to develop the necessary muscle memory needed to be a good driver, it’s very clear that any thoughts I ever had of racing cars are well and truly behind me and like a number of others in the extended Kenny – Buckle family, all I can do is join in with others in admitting, “we all want to be Colton!”

For those who asked about specifics of lap times – as well as the many comments about how lazy it all looks – so here are the (hand-held) lap times. After a warm up lap, there’s another 8 laps before a final backing off and cool-down lap.