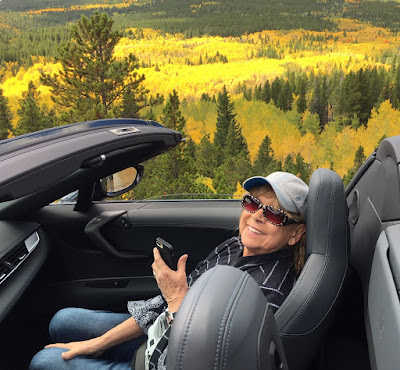 What else can we say; bathed in sunlight one moment and then, in a matter of hours the temperature nosedives fifty degrees Fahrenheit and just like that the chill winds from the north arrive and snow follows. When we built our Windsor home we made sure we had fireplaces on both levels – real gas ones and not those decorative electric showpieces. Their backup batteries work just fine should we lose power, but fingers crossed in that regard; should we have had a couple of gas lamps installed while the contractors pulled all the lines?

Margo and I enjoy living in Colorado as it’s not just colorful but you do get to experience all four seasons and contrary to popular belief, when the snow falls it rarely accumulates to any extent and as a storm front passes we know with a certainty that give it a couple of days and it will be sunny again. Any reminders of the snow that just fell will only be visible in mounds piled high by the graders clearing shopping center car parks. I think the last memorable snow incident was way back in the winter of 2006 when three blizzards in a row hit Colorado’s front ranges and the accumulation saw snow piled higher than the roofline of our former home in Niwot.

I was reminded of this as it was one Christmas that my daughter Lisa spent with us and on her very first day, having picked her up from Denver’s airport, we drove to Niwot village only to be greeted with snow flurries. Let’s be quick about it, I said at the time as I have a bad feeling about this. Sure enough, by nightfall the first blizzard had arrived. Margo was in Simi Valley, but after three blizzards hitting us all flights to Denver were cancelled and with Christmas only a couple of days away, she rented a car and drove back weaving her way in-between storms across the Rockies. She made it in time. Yes, Fall is coming and winter will follow shortly. 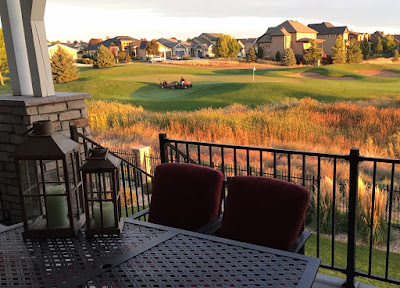 Now, look at the difference – snow overnight changed the landscape completely. From eight degrees Fahrenheit to barely twenty! We had business to attend to in Boulder and elected to catch an earlier dinner nearby in order to get home before havoc was unleashed and yes, even as we were seated and prepping to dine, the wind changed direction and picked up velocity. You just knew something was about to happen!

With each fall we tend to spend time enjoying the foliage as it changes color but all too often we forget that these colors are just a harbinger of more dramatic changes ahead. That night, around midnight, we were awakened by lightning and heavy peels of thunder – yes, we were witnessing that much talked about thunder snowstorm or simply, thunder snow, as the locals refer to it – the initial rain turning quickly to snow as the lightning flashes continued! 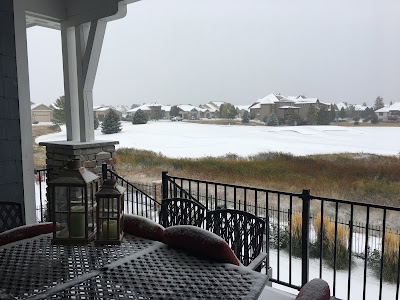 We are about to pack our car and head over to the east coast. This has been something we have talked about doing for some time. When we had the company command center, we had planned to take it across country with the thought of using the RV as base camp for two HPE NonStop events but ultimately, talk subsided even as we sold the RV. Now, free of the financial overheads that come with owning an RV, we can stay in hotels.

By itself, that proved incentive enough for Margo to look at her schedule and as it’s been some time since we last caught up with the Rosens – Robert and Randy – it seemed like now would be the perfect time. A weekend outside Washington D.C. seemed like a good way to enjoy the last remnants of fall. It’s also the ideal opportunity to see how our Jaguar F Type performs as a grand tourer, given how our BMW M4 left a lot to be desired in this respect. As for the Range Rover - well, how about next trip! 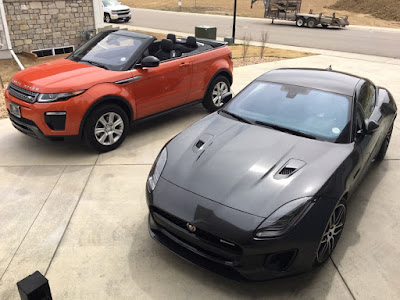 Some of you may recall I moved offices this year – from the second (main) level to the first (lower) level. Some of you may even recall that in the process of building the first floor, we decided to locate the bar, wine cellar, “high-tops” pub and media room but this is purely coincidence. What I have been doing is slowly going about the task of decorating the room which has turned out to be a fantastic place to work and it’s introduced a new discipline.

A clean desk; well, occasionally, as I respond to the urge of simply resorting to chucking everything away. But the result is pleasing as it’s also representative of me clearing out my mind, emptying it of all distractions, right? Naturally enough, this is something I routinely do – cleaning my desk, that is - and to be honest, terrifies Margo as we have no clue as to what made it into the trash can.

What has transpired this week prior to the arrival of our first snowfall is that our friendly and indeed reliable handyman we turn to for help doing almost anything inside the house, re-mounted and re-positioned some of our artwork, put up a new clock on the main floor deck, installed new hangers for towels and yes, installed shelving inside the media room that will house part of our DVD and CD libraries – remember them? 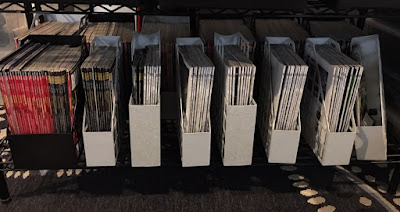 Little silver disks that hold lots of data, right? Not going to discard any of them as some simply cannot be found on streaming services. Freeing up space in my office also means that I will shortly relocate my library of Road and Track magazines – thirty plus years of them –to the office although not sure I have the shelf space. Started rereading older stories from journalist Peter Egan; what a hoot!

When I began posting to our business blog, Real Time View, I suggested in the post of September 24, 2007 What did you have in mind, eh? that:

Not much has changed on that score and returning to the many columns Egan contributed to various magazines, not to mention the books that followed, I was reminded rather coldly that my own blogging life started back in 2007. So long ago! The good news for Margo though is that I am finally out of her office and that has warmed the cockles of her heart. Yes, fall is coming with winter not far behind. 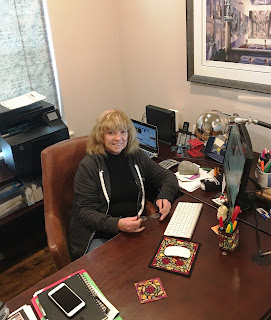 There has been some discussion as to when we last passed through Washington D.C. and our best guess was when we attended one of the HPE Regional User Group (RUG) meetings held in former offices of EDS in Virginia. It was 2015 as we can best recall and we drove there in the RV. It was at a time when we drove from Santa Barbara to North Carolina’s Outer Banks with just a stop to repack in Colorado being the only break in our travels. We both agree that this was the last time we had seen the Rosens and as we worked our way through calendars, it soon became time to realize just how rapidly the passage of time is progressing.

We did pass through this part of the country again in 2016, this time towing the Mini as we planned to catch up with former colleagues at IBM, but the meetings didn’t go off as planned. Margo often asks me, how many times did I fly somewhere to meet someone only to be informed that day that the meeting would have to be rescheduled? With hindsight, more times than I care to recount, but then again, that is business life on the road. Airport lounges, hotel lobbies and business foyers - looking back at my business travel rarely did anything go to plan. Sitting in my new office makes me smile as I look back to those times not because I miss it all, but rather, because I don’t miss it. 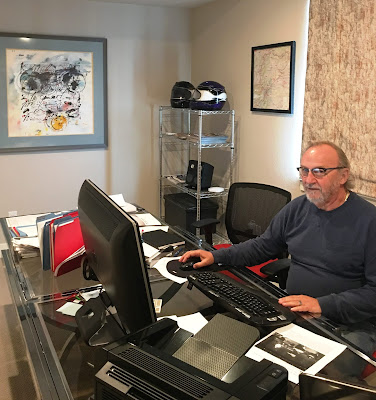 This year has been tumultuous in that we flew back from Sydney, Australia at the beginning of the year. We then flew to Munich in March, Edinburgh in May and Amsterdam in July; three separate trips to Europe on business where much of the time was spent waiting. Separate trips in the US to Las Vegas, San Jose, Atlanta and Dallas where only the trip to Atlanta involved flying and it’s not all that difficult to imagine that 2019 has turned out to be a lot different to what we expected. Has Pyalla Technologies, LLC., become a “lifestyle company?” Not really …

However, what Pyalla has done for us has allowed us to enjoy business again and as we continue to celebrate the company’s tenth birthday – more of which you can read in the post of October 2, 2019, Ten years, and counting … working in “bizcations” when they make sense has definitely added to the enjoyment that being sole proprietors entails, giving us ample time to simply enjoy dinner out on our deck makes up for the multitude of sins that the passage of time has witnessed! Working too hard? Pushing the envelope and trying to accomplish the impossible? For Margo and I while we cannot complain there have been times when we wondered out aloud – what are we doing? Fall has arrived! 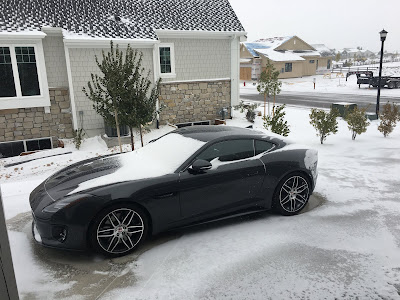 Unfortunately, even as we see the early signs that winter is only a couple of weeks away, oftentimes arriving in Colorado ahead of the calendar, the preparation for our roadtrip back east involves cleaning the Jaguar that was left outside. Looks like it did just fine and dusting away the little snow that the wind has left behind should be no problem at all.

Our state promotes itself as being Colorful Colorado and it never disappoints at this time of year. But there is a sense of melancholy all the same; another trip around the sun is about to be completed. “Remember all those things you were saving up to do well, the time has finally arrived,” Margo reminded me just a short time ago. “What are we waiting for now? It’s time to do those things we always talked about doing, so let’s put some adventure back into our plans for 2020!”

We had been talking about fall coming for so long as summer this year had been particularly hot and the prospect of cooler weather holding some appeal for us both. But as with anything that’s longed for particularly over an extended period, it passes by all too quickly. Margo and I continue to enjoy an evening martini and a glass of wine with dinner but it looks like these will be enjoyed in our downstairs pub setting. Nothing wrong with that mind you – the conversations remain lively, naturally enough – but as with all previous occasions when the snow first falls, it isn’t just a reminder that winter is around the corner, but rather musings on when exactly can we expect to see spring again? 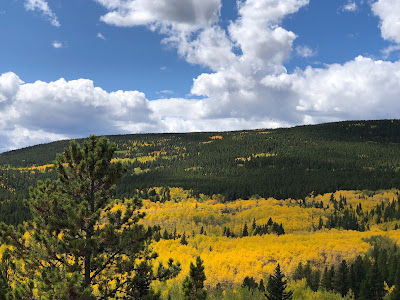