This too will blow over: welcome to the “Not! Normal” 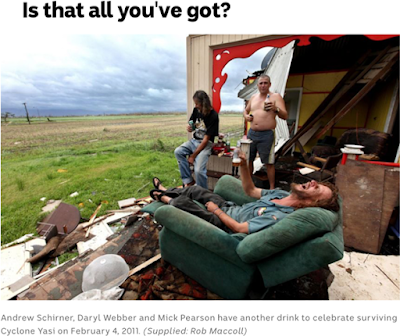 When I came across this picture and the story that accompanied it, I couldn’t help myself and used it this past week in numerous updates I provided my clients. The heading alone tells it all – Is this all you’ve got? The photo won a prize in an Australian publication even though it was taken in 2011 and looked back on the aftereffects of a cyclone that hit North Queensland. “Shut the bloody door, there’s a breeze!” was all that was said when the photographer entered through the front door. “Basically, most of the house was gone except the front steps,” said the photographer.

“Laying back on his big old recline,” the photographer noted, “they all had beers and they’d partied all night. They had a generator which kept the fridge cold and they had plenty of meat for the dogs.” In times of crisis it’s always refreshing to see the beginnings of a fresh start and while these lads could laugh at the season, there was every confidence that they would be facing something new. And clearly, this wasn’t a time to reflect on the past but rather on what some have taken to describing as the “Not! Normal.”

The restrictions are gradually being lifted here in Colorado, and rules are changing daily. Still no access to restaurants and pubs, mind you, or to the shopping malls but otherwise, here and there is evidence that some semblance of life as we knew it is returning. In fact our local beer pub, the Mighty River, obtained permission to open on Friday, May 29th. The owners, our friends, The Millers’ sons are beyond happy!

Even with the restrictions my neighbor Steve told us this weekend that his Chevrolet dealership in Ft Collins had managed to sell 70 plus cars for the period. Took a lot of “junkers” in trade, he admitted, and they had in place sanitary teams to make sure cars on showroom were clean after every “inspection” but otherwise, the car-buying public was beginning to come back. 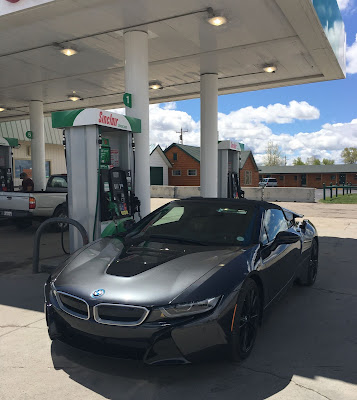 Opening of the local micro-brewery aside, the gradual lifting of restrictions that we see happening here in Colorado has meant that we have golfers routinely sidling past our home. It seems that absolutely nothing interferes with their round of golf. Even as locals here posted about the absurdity of it all, golf prevails. Having said that, it should be noted that Margo and I have never seen as many community members street walking, so as to speak. And yes, they come in all shapes and sizes and it’s about time we report some of them to the Lycra / Spandex police! It’s just not normal: Truly, is that all you’ve got?

The lifting of restrictions also means that we could take to the highways once again. There were still some issues to do with availability of restrooms and where best to find a good cup of coffee, but all the same, pulling into a gas station in Walden, Colorado that is at the junction of Colorado’s State Highways 14 and 125. The drive features a climb up the Poudre Canyon and crests Cameron Pass where the summit has an elevation of 10,276 feet. Snow lay thick all around us as there had been more snow falling over night even as down in the foothills, there was a healthy helping of rain that at this time of year (a little later in the year than normal), is most welcome. 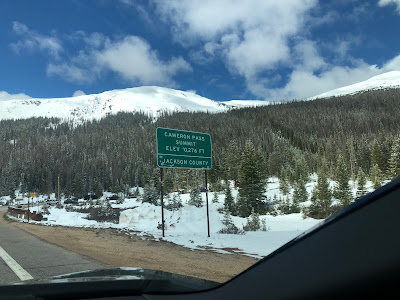 The drive up the Poudre Valley is a much-followed ritual for Margo and me. It has become common practice that following the purchase of any car, we would make this trip a priority as the 100 miles of pavement between Ft Collins and Walden features almost every combination of corners, hill-climbs and long downhill runs as you will find anywhere in the Colorado Rockies. The road frequently narrows and there is one tunnel carved out of the mountain. Before the summit there is a sizable reservoir that attracts fishermen from the surrounding counties.

At this time of year, there is plenty of wildlife to see. On this occasion and being the third car in a three car convoy, we happened upon a number of bighorn sheep. One actually stepped out onto the road just as the lead car came upon the herd, but there were no incidents. While we carefully threaded our way around the other two cars that were now stopped in the middle of the road, we managed to photograph one of these magnificent creatures – threatening us with a head butt if the situation called for such a response. 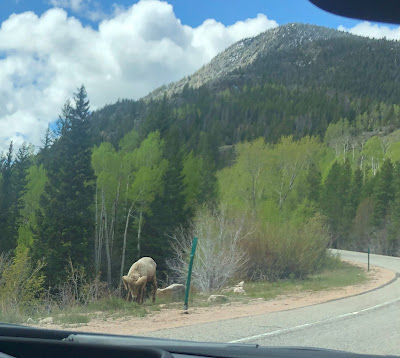 We have now accumulated a little over 2,000 miles on our BMW i8 Roadster. What do we think? How does it compare to our previous i8 Coupe? For starters, we were able to take the white coupe on long trips including a multi-week journey to Toronto, Canada. In the past we had done the same trip in our Jeep Grand Cherokee SRT8 and before that, in our Maserati GT-S. There really wasn’t all that much difference between the GT-S 2+2 and the i8 2+2 as in both cases, we opted for smaller suitcases along with a couple of suit carriers. However, when considering longer trips in the i8 Roadster we will need to be prepared for the loss of the back seat due to the collapsible ragtop, but even so, we are going to give it a go this summer!

Turning to a more serious consideration and before we become the laughing stock of our friends, this BMW creation has two things going for it – it’s spaceship looks (that still attract onlookers whenever you stop for gas) and it’s engineering. It’s a hybrid but in such a pretty package you don’t need to apologize to anyone. Its engine doesn’t look all that promising on paper but put it into sports mode, fire up all the engines which then turn it into an all-wheel-drive vehicle, and it becomes a very serious sports car. Did we mention that it is a very comfortable mode of transportation?

By many standards, it can be considered a supercar not so much because of its outright performance but because of the total package BMW delivers. Yes, it has scissor doors as found on only the V12 Lamborghinis and it has the overall height you would expect on a supercar. In the right hands it has no problem keeping up with many of these cars even as it heads all of them when it comes time to compare gas mileage. We have returned figures as high as 70 mpg on some trips. 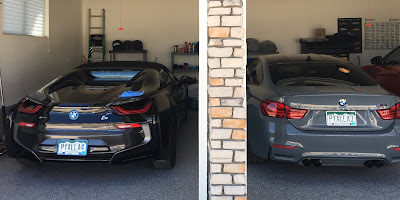 Then again, it’s no BMW M4 Competition either and the M4 Comp has a back seat as well making it a true 2+2 sports car. On the other hand, when it comes to our other sports car, Margo’s Jaguar F Type, we can pack a lot into it’s trunk as our recent trip to Maryland proved. When it comes time to consider what next as leases lapse, it may be a surprise to note that the Jaguar is looking more and more like the “keeper” while the BMWs will go back. And there’s a very good reason for that, for those who have been keeping up with the car rotations at Holen-Buckle garage.

Having had three Corvettes to date (we enjoyed almost all of them), the C8 Corvette in Z06 format is a clear favorite for future consideration. There’s still the niggling thought over whether a previous model C7 Z06 may make more financial sense given the steep depreciation curve that always follows Corvettes, but it’s hard to argue against the C8.

Out on America’s highways there’s no accounting for what you may come across. We have encountered a moose in the middle of the road just as we encountered the bighorn sheep more recently. We have avoided rock falls and even deep drifting snow. But every now and then you come across something that makes you laugh and this pickup below brought a smile to both our faces as we checked out the strike marks. Not sure about the reference to hula dancers (very bottom) but then again, why not? 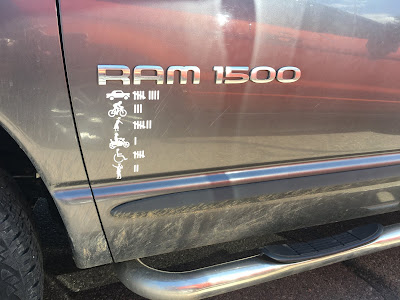 In the reflection you can just make out the presence of Li’l Pumpkin – our beloved Range Rover Evoque roadster. Over winter we really piled on the miles, but not so much of late. Margo and I have been following all the guidelines during this global pandemic and given how we have been working from home for many years now, much of what others are experiencing hasn’t really hit us. We have had separate offices on different floors for some time and I do walk into her office and interrupt her with my latest thoughts, but overall, it has been business as normal. That is, without the constant travel and this truly does make it “Not! Normal” for us.

We have adjusted too to the complete absence of night’s out at restaurants as well as afternoon strolls through the local mall. Gone to are out visits to the local gym, although to be honest we only manage to do this on cold days and that hasn’t been all that often this year. We do go for walks around the block but of late, we have found our strolls up and down the aisles of our local Costco more than making up for our absence from our neighborhood pathways.

What has become more of a routine than at any other time in the past is our four o’clock martini. It used to be five o’clock but we brought it forward an hour to give ourselves a little more time for conversations. This disruption to our former way of life has been pretty easy to handle but we both find it still very important to find time for each other. We read so much about the disruptions that come with being forced to live one on top of the other, but for us, with the work we do, this Not! Normal hasn’t been too big of an adjustment to make. 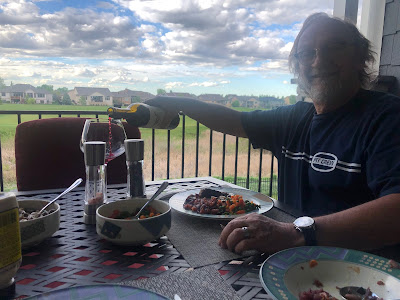 There are the evening dinners on the deck given as how the weather has now turned distinctly warmer. Our friends in California continue to send us photos of the backyard grill and swimming pool and there is no discounting how jealous of them we become with each photo appearing in our messaging app. On the other hand, we can still laugh right along with them.

Our ex-neighbors and friends, the parents of the brewery owners, moved to Arizona and are reporting great weather there. We sometimes do a face time martinis with them, different from the past face-to-face, but not so bad!  There’s not much that mother nature can throw our way that we haven’t already experienced in the past and we too can laugh, perhaps more than others in these times (and we are not laughing at the seriousness of it all) that we too wonder what’s next.

America has taken a huge hit on its population particularly among the elderly and those with existing ailments as well as on its economy. But in the cycle of what historically has disrupted our lives for as long as history has kept records, we do know that this too will pass. When it all blows over and we come to terms with whatever appears as the new normal, we will adjust. Just today, for instance, Mastro’s in Thousand Oaks, California, will reopen and that is a huge win for society should your happiness include a great steak. So before the post gravitates to the maudlin side, let’s just raise a glass and reflect on where we all have come from and simply rock back and laugh. Is that all you’ve got? 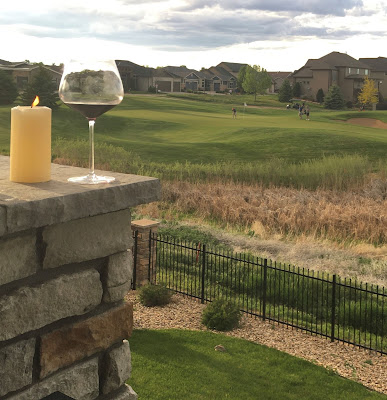