When you are in a hole and need to get out, stop digging! 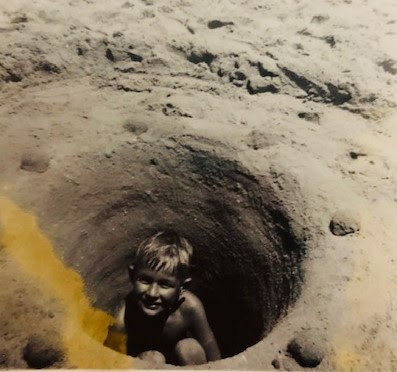 Anyone care to guess who is in the hole? I am grateful to my sister Judy for finding and then emailing me this photo along with a couple of other photos that truly were a blast from the past. Given the nature of some of the other photos that accompanied this particular picture I can pretty much tell where it was taken and when. It was during an annual vacation the family took to Avoca Beach, on New South Wales’ central coast just north of Sydney and it had to be around 1958. I would like to say that my family should have always dug a hole for me, set me down in it and then came back for me later in the day just to make sure I didn’t get into any untoward mischief.

The arrival of this photo was appropriate for the times. Living far from any beach and tucked up alongside mountains any opportunity to just leave the house and meander wherever, until we came across sand seems rather at odds with our circumstance. While the news about the global pandemic streams into our home each night, the reality is that life has changed and I have serious doubts as to whether it will ever be the same. Short trips up the mountain are OK but more adventurous outings appear to be more challenging. Then again, I looked to be safe down in that hole and without a care in the world. 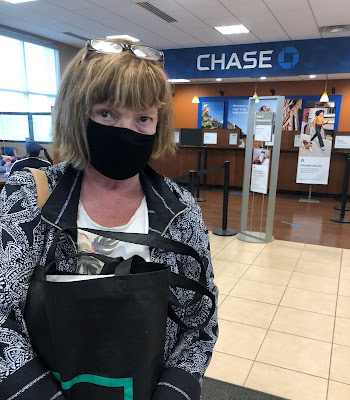 It was without thinking too much about the circumstances of our time that Margo and I headed to our Chase bank’s local branch office. The bag Margo was carrying courtesy of HPE wasn’t to hold misbegotten funds seized during a raid. We were not there to cause mischief but rather to conduct normal business routines. However, the very fact that we, along with several other patrons, all showed up wearing masks wasn’t something we could simply ignore. The photo opportunity just spoke to us and that brief period of levity was enough to ensure we really weren’t stuck down a hole.

Here in Northern Colorado, businesses are all going a little overboard with the way they are interacting with their customers. While Margo and I understand the new normal we are living in these days, we aren’t too sure that it’s helping our mental state all that much. Take for example the steps some vendors are going to as a demonstration of their concern over our wellbeing including doing everything they can to help us. Pulling into a gas station I couldn’t help but notice that if I called the garage while pump-side, someone would rush out and fill my tank. And yes, this could be seen happening at a pump a few aisles down. 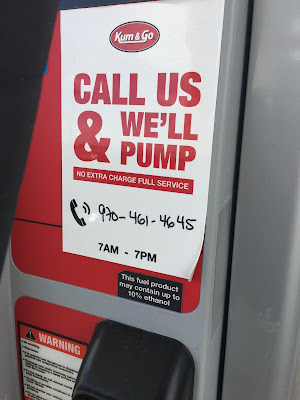 With the cars we now have and gas readily available and still a lot cheaper than we have seen for many years, the temptation to take to the hills proves irresistible of course practicing social distancing (except when passing other cars). We tend to avoid weekend road trips preferring instead the relative calmness of weekday travel, but nevertheless, Colorado’s popular tourist attractions continue to draw a crowd. It’s always busy up at Estes Park for instance and the drive to Walden along the Poudre River, continues to attract the fishing crowd with barely a trickle of water left untouched by lines and lures.

What has also picked up are the many impromptu car shows for which Colorado is also famous. On our last outing, the Top of the Rockies Corvette club showed up and lined up in a parking lot adjacent to the Estes Park Police Station, they were hard to miss. No C8s for those interested in seeing the latest iteration of Corvette, but plenty from this millennium. Of course, Margo and I had to walk the length of the lot even as more Corvettes began arriving. For Indy 500 fans there were two Indy Pace Cars from different decades. 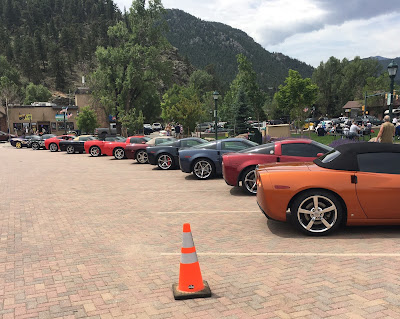 It all seems rather surreal to be walking the streets of Estes Park with our facemasks as we practiced social distancing. However, while everyone seemed to be consciously watching out for everyone else, all bets were off when lines formed at the lights controlling sidewalk crossings. Oh well, at least they got it half right, but all the same, it was a little off-putting so we didn’t stick around for that long. It seemed that there were many others prepared to dig holes for themselves and for Margo and me well, that was OK.
The good news was that Claire’s Restaurant looked to be open serving patrons seated outside on their deck. For those who may not be familiar with Estes Park this is a popular destination if you’re looking to relax over a weekend brunch and on the many occasions we have made this our destination Claire’s has been serving two-for-one mimosas. On this latest drive into the town, we skipped brunch preferring instead to complete the highways 34 and 36 loop. Starting in Loveland and finishing in Boulder, the route never fails to deliver something of interest and the last time we drove it, we encountered big horn sheep. But not this time … 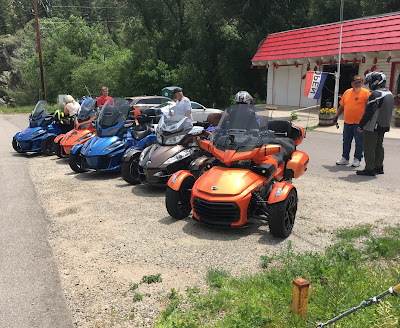 Part way up highway 34 there is a cherry pies store that sells everything from cherry pies and cherry strudels to cherry jam and more. On this most recent outing, we came across an impromptu gathering of Can-Am Spyder trikes or three-wheel vehicles or whatever. They are still hard to categorize but as the biker demographic continues to age, there is now a wind-in-your-face option for everyone! I know for a fact that Margo gets very nervous each time I encounter these groups as this looks to me like the solution to a question I am not sure I am even allowed to ask. Having sold our last motorcycle, what do we ride next?

The bad news here is that there are many options with vehicles like the Slingshot and the Vanderhall entering the market, but as tempting as each of these offerings may be, the circumstance isn’t quite right to begin eyeing the helmet, jacket and boots sill sitting in the garage. There have been other projects keeping us busy on the home front so perhaps Margo has a point in redirecting my attention away from the road. On the other hand I am sure I can find a sympathetic audience to my cause – if I am to stop digging and leave my hole I cannot think of any better mode of transportation bringing more fun to the equation than one of these cherry-colored trikes. 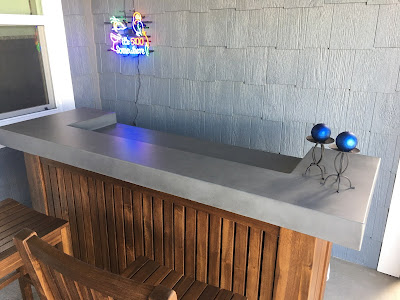 This past week we added a fourth bar to our home. We have arguably three bedrooms and four bars which raised more than an eyebrow among my family members back home in Australia. Despite my explanations I am not sure I effectively conveyed the right message but it’s simple really. On our main floor we have a small butler pantry and wet bar combination in the passageway between the kitchen and the dining room. And yes, we had a similar set up in our former home in Niwot so no real problems here, I suspect.

Also on the main floor we have an outside dining room where we eat meals during the summer months and there you will find a Tommy Bahamas’ rolling wooden party cooler that also serves as a plating area when cooking at the grill. Fill it with ice and it is the perfect place to store beverages and to keep meats chilled. On the lower level we have a proper bar that we use all year around and then there’s the recent addition of another serving bar on the downstairs patio that is again, for summer use only.

Even with this explanation and the comparisons made to our former home I am bound to get more questions so I will just stop digging, once again! 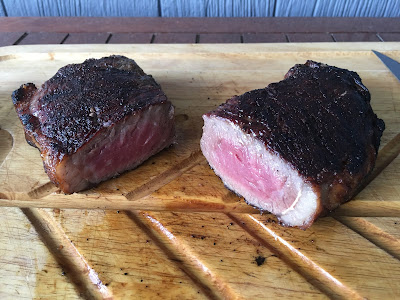 Practicing social distancing, quarantined in our home as it were doesn’t mean we cannot continue to grill. Fortunately we have ready access to superior prime beef in Colorado and so prime tenderloin regularly makes it onto the menu. Nothing like a tall filet mignon at day’s end! On the other hand, there are now plenty of real world sports returning to television. Watching the Indy Cars run around the Texas Speedway and then, just his past weekend, around the Indianapolis Grand Prix circuit, I have to say it is so much better to see real cars again than those virtual cars of the previous months. Although, I have to say, I wasn’t expecting to see Kiwi V8 SuperCar champ Scott McLaughlin do as well as he did – two wins, as I recall.

Of course, our friends Brian and Jan Kenny have grandson Colton Herta back on track and after two events, he lies fourth in the championship. Here’s to an even better year than 2019 when he won three poles and two races as a 19 year old. While twitter is alight with references to HertaMania 2.0 – a reference to former times when his father, Bryan Herta, raced Indy Cars – it’s for good reason. No one expected such great results from the youngster as quickly as they have happened. But it is one picture of Colton that I really like and it wasn’t too long ago that I lobbied for its return – Colton’s Mohawk! 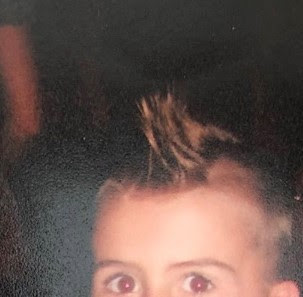 Yes, that’s Colton and I am not all that sure how I came across this photo. From the very first time Margo and I met Colton his grandmother cautioned us that he was very much a free spirit and coloring his hair and cropping it had become routine.  There is another reason for me to include this photo of Colton and it has nothing to do with racing or vacations or trips to the mountains. Reflecting on the direct impact of the coronavirus on us all and of the changes it has made to our everyday lives (to where we are gradually if not grudgingly accepting as our new normal), finding humor in anything at all is difficult.

By the time you read this post, Colton will be back on track this weekend at Road America where he will be competing in a double-header event and where last year, at this circuit, he secured the pole. Our best wishes go out to him for a successful and safe weekend.

It’s proving hard to simply pick out anything without risking offending someone – when did we get so polarized in the comments we make? The simple reason for me to look at this photo of young Colton, as I have done this week, is as a result of my sister also including one other photo in her email. You can say, it struck a chord. Yes, Colton; back in the very early 1950s I was photographed sporting one of the earliest renditions of a Mohawk! Check out, too, the attitude of one so young even as my paternal grandmother looks as pleased as can be. And with that, I will return to my hole as I am now ceasing all further digging! 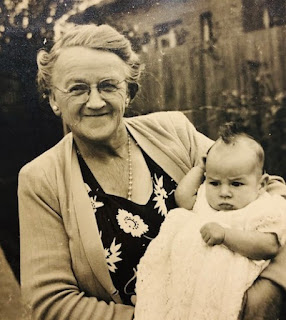